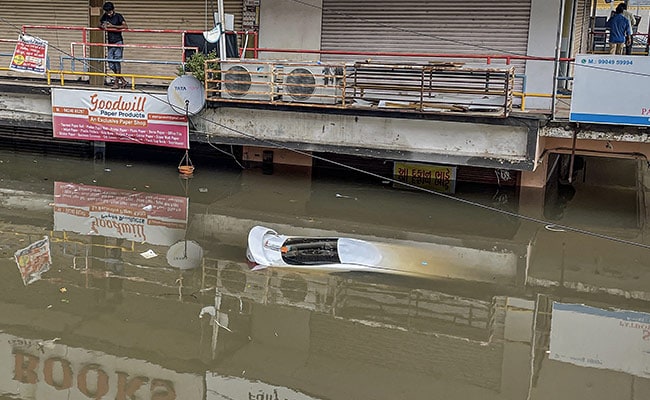 New Delhi: At least 18 people, including six children, were killed in rain-related incidents in Maharashtra, Gujarat and Madhya Pradesh while thousands were evacuated and forced to stay in shelter homes amid continued heavy rains in the states on Tuesday.

Heavy rains accompanied by strong winds lashed Mumbai and suburbs and also flooded many parts of the city within a couple of hours, throwing road traffic out of gear at some places.

Three children were killed and four others injured after being struck by lightning amid rains in Madhya Pradesh’s Agar Malwa district.

Heavy downpour covered more areas of Gujarat where six people died in rain-related incidents in the last 24 hours, raising the toll to 69 since June 1.

A total of 27,896 people were evacuated from flood-affected areas and 18,225 of them remained in shelters while the others have returned home, state Disaster Management Minister Rajendra Trivedi said.

According to the State Emergency Operation Centre (SEOC), Anjar taluka in Kutch received 167 mm rainfall in six hours since 6 am on Tuesday, while Gandhidham taluka in the district got 145 mm rainfall.

Narmada, Surat, Dang, Valsad and Tapi districts of south Gujarat, and Panchmahal and Chhota Udepur in central part of the state witnessed heavy rains over the last one day.

At least nine people, including three children, died in rain-related incidents, while 95 people were evacuated from flooded places.

The Met department has issued a red alert of extremely heavy rains at isolated places for Nashik, Palghar, and Pune districts for the next three days.

Two persons were killed after a structure collapsed in a Mumbai suburb, while one person drowned in the Gadchiroli district in east Maharashtra, authorities said.

Three residents of Madhya Pradesh died and as many others are missing after their vehicle was swept away from a flooded bridge amid rains in the state’s Nagpur district on Tuesday.

The deceased were residents of Betul district in MP.

The children, in the age group of four to eight years, drowned while bathing in the pit which was dug by a farmer near their house and water had collected in it due to rains.

Four people were injured, including two critically, after a portion of a dilapidated residential structure collapsed in Pune city.

Seventy people were evacuated by authorities in Nashik district and 25 in Gadchiroli district as a precautionary measure.