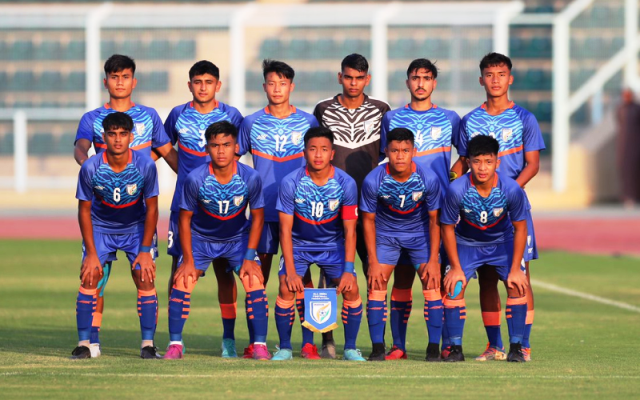 NEW DELHI: The India U-17 men’s team registered a 3-1 victory over their Oman counterparts in a friendly match held in Muscat on Tuesday (September 27, 2022). The team landed in Oman yesterday to play against the hosts as part of their preparations for the AFC U-17 Asian Cup Qualifiers 2023 which is scheduled to begin on October 3, 2022 in Dammam, Saudi Arabia.

Indians notched up the win courtesy goals from Gangte (10’) and Thokchom (18’), who scored in the early minutes into the game and Lalpekhlua (69’), who rounded off the tally in the second half. Alhaitham Alshukaili scored the solitary goal for Oman a couple of minutes before the end of regulation time.

The first half began with the Indians pressing hard to seize the initiative. In the 7th minute, Lalpekhlua’s shot went wide off a Danny through pass.

Three minutes later, India were awarded a penalty. Gangte stepped up and made no mistake to give India the lead. The Indian colts gradually found their footing as Thokchom doubled the lead from Guite’s pass in the 18th minute.

A couple of more chances were missed by India but the youngsters remained upbeat in their efforts to score more goals. At the stroke of half-time, Korou’s powerful shot from a free-kick hit the pole.

The second half began on similar lines as Bibiano Fernandes’s boys got back into attacking mode immediately. Indian earned a couple of free-kicks in good positions but couldn’t make best use of them. In the 48th minute, Guite saw his free kick being cleared by the Omani defender.

Korou Singh proved to be a constant threat for the Oman defence and he often tested the opponent custodian with his shots.

In the 61st minute, Korou was provided with an opportunity to widen the lead off a Lalpekhlua cross from the left flank but the former failed to tap home.

Nine minutes later, Tamim Alburaiki tackled Lalpekhlua in the box and India earned another penalty. Lalpekhlua shot went straight into the back of the net making it 3-0 for India.

In the 88th minute, Alhaitham Alshukaili scored for Oman from a free-kick. They were down to 10 men after Tamim Alburaiki was handed a red card.