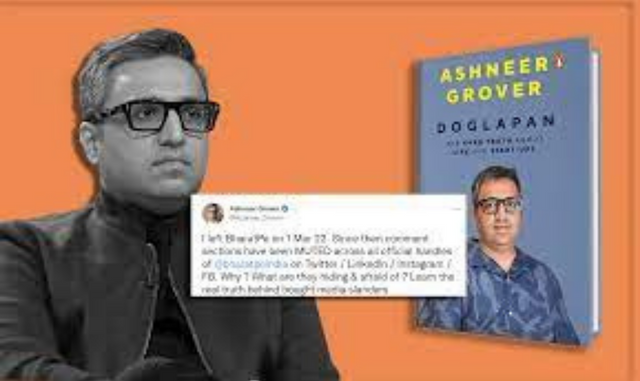 Ashneer Grover’s DOGLAPAN – In The Name Of Start-ups

Virality needs mass connect, and who could be better placed to acquire it than a brash, outspoken hugely successful, self-made immensely rich guy, who prefers to wear the ‘refugee’ tag, and speaks casual Punjhinglish to not just land his punches, rather conduct his business as well.

‘Ye apna banda hai’, is how people react when they listen to Ashneer Grover, ‘dil se bolta hai’, someone who can make a ‘mahine ka ek taka’ pitch. Not that Grover is not full of gas, or does not dump a lot of garbage for his willing fanboys to consume, yet he is lapped up by the public for his ability to create and market simple fintech products, and talk about entrepreneurship in general.

TVF Pitchers was the first to hype the start-up craze and culture about a decade ago. PM Modi began selling start-up dreams soon after coming to power. But it is the Shark Tank India that has finally invited the successful as well as the wannabe entrepreneurs into our drawing rooms and dinner discussions. And despite their stupendous success stories, Vijay Shekhar Sharma (PayTm), Falguni Nayar (Nykaa) or Deepinder Goyal (Zomato) have not become the poster boys of Start-ups, rather it is Ashneer Grover of Bharat Pe, whose fame has ‘broken out’ in the ‘price action’ sense.

There is no denying that Ashneer Grover is box-office. In its preview, Shark Tank Season 2 made more buzz about Grover’s absence than anything else. His autobiography also carries that sense of self-belief, and the self-image of a desi stud, providing simple solutions to complicated problems, making big money as by-product, and fighting off or falling to conspiracies by petty men surrounding him.

Doglapan is an engaging read, and leaves its mark with the choice of the title itself. It is a reflection of how Grover places himself – a desi creator in a world infested by slippery, posh doglas (hypocrites). The autobiography faithfully documents his journey from the streets of Malviya Nagar to IIT-Delhi (Civil), IIM-Ahmedabad, and then his career as an investment banker with Kotak and Am-Ex, from where he moves on to discuss his role in making of the two unicorns – Grofers as CFO, and BharatPe as the co-founder. The narrative is full of anecdotes from coaching, examinations, post-JEE counselling, ragging, and college days. Perhaps the most vital take-away from this part is that one should keep working as hard after entering the college, and does not succumb to the feeling that he has ‘arrived’. This has been the bane of most Indian students, who tend to take it far too easy after qualifying the competitive exams.

The book takes us through the creation of BharatPe. The lives, motives and limitations of co-founders, Bhavik Koladia and Shashvat Nakrani, are discussed. How Bhavik has not let his limitations, like the served prison time in the US owing to some credit card fraud, and indifferent early education, not come into the way of his self-taught growth and entrepreneurial zeal is quite inspiring. The book explains the technical solutions and business model provided by BharatPe, various copyright hassles faced by the company, and even takes us through various funding rounds involving Venture Capitalists like Sequoia, Ribbit and Tiger Global.

Grover also discusses the ‘smartest corporate move in history’ that was the acquisition of the beleaguered PMC (Punjab and Maharashtra Bank), driven by Jaspal Rana of Centrum and himself by forming the Unity Small Finance Bank. While Centrum shall provide the expertise, BharatPe will come up with the required capital. In process, BharatPe has become the first fintech company to be granted a banking license.

Of course, Doglapan presents only Ashneer Grover’s side of the story, in which he can do no wrong, whose pursuit is honest, his wife is an angel without blemishes, everyone became jealous of their mega-success, and conspired to oust them from their own creation. But there is no reason for us to blindly accept his viewpoints on his exit from Grofers and his views on Albinder, or the denial of IPO Financing by Kotak and the subsequent fallout, which led to his unceremonious ouster from BharatPe.

The ground for Ashneer and his wife’s exit from BharatPe was laid by the so-called leaked audio and the threat of legal action by Kotak Bank. A leaked audio clip (fake, as per AG) in which Grover can be heard threatening a Kotak employee for turning down his request for Nykaa IPO-financing at the last minute, and the fear of possible legal action by Kotak, led to the former being sent on ‘voluntary leave’, which was gradually turned permanent, and then was eventually removed.

Like most teetotalers, Grover makes big deal about his abstinence from alcohol and cigarettes, and connects them with savings made for his luxury cars, and general goodness of his character. His ‘holier-than-thou’ attitude and enormous insecurity leads him to accuse his detractors of hobnobbing over daru and sutta. This unrequited derision might explain BharatPe’s accusations on the Grovers of engaging in massive misappropriation of funds, including, but not limited to, creating fake vendors and abusing company expense accounts to fund their lavish lifestyle.

The book is most readable when he does not talk about BharatPe, or his wife, the love of his life. He narrates how he earned a net profit of Rs 2.25 crore during the listing of Zomato via IPO-financing, but lost Rs 25 lakh on Car Trade IPO. The subsequent NYKAA IPO-financing denial by Kotak is what caused the huge furore. Currently, Grover is ‘quietly’ working on his ‘Third Unicorn’, which won’t be backed by VC Funds. He is being at Shark Tank 2, but is not away from public limelight, releasing a quotable quote every day, perhaps as a part of the ‘Doglapan promotion’, the latest being, “Gratuity is for beizzati”.

Six Held With Over One Quintal Ganja In Sambalpur

Dropped By The Wicket-Keeper Time, Pant Must Play Like A Man Spared To Rule

The Choke’s Collection of Duds- Death of Indian Cricket

Inspired by Pharaohs, this mega-rich Brazilian wanted to bury his 310000 pounds…

Give ATR On Naba Das Killing Within Eight Weeks: NHRC To…