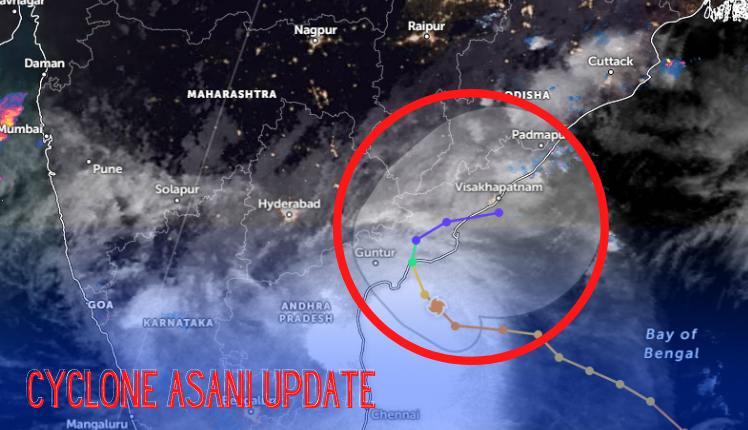 Bhubaneswar: The Severe Cyclonic Storm ‘Asani’ over Westcentral and adjoining the southwest Bay of Bengal moved northwestwards with a speed of 23 kmph during the past 6 hours and lay centred at 2:30 pm on Tuesday, over the west-central Bay of Bengal.

Thereafter, it is very likely to recurve slowly north-northeastwards and move along Andhra Pradesh coast between Kakinada and Visakhapatnam and then emerge into Northwest Bay of Bengal off North Andhra Pradesh and Odisha coasts.

It is likely to weaken gradually into a Cyclonic Storm by 11th May morning and into a depression by 12th May morning. The cyclonic storm is under the continuous surveillance of Doppler Weather Radar (DWR) at Machilipatnam (Andhra Pradesh), the IMD added.

The IMD has issued a yellow warning for heavy rainfall 7 to 11 cm, very likely to occur at one or two places over the districts of Malkangiri, Koraput, Gajapati, Ganjam and Puri.