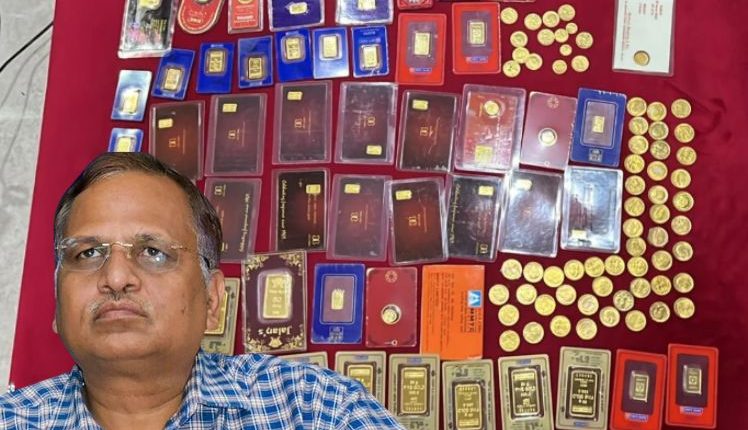 Around 2 Kg Gold, Crores In Cash Seized By ED In Searches On Satyendar Jain, Aides

New Delhi: Enforcement Directorate (ED) seized crores in cash and gold coins and bars weighing nearly two kilograms were during searches at the premises of Delhi minister Satyendar Jain, his wife Poonam Jain, and his accomplices and others involved in laundering money.

Health minister, Jain was arrested by the agency on May 30 in a money laundering case. He is currently in the ED’s custody.

The financial probe agency recovered Rs 2.82 crores in cash and gold weighing 1.8 kg so far, while the Aam Aadmi Party minister has been accused of laundering over Rs 16 crore through hawala transactions with the help of his wife, daughters, friends and aides.

One of the accused had provided accommodation entries for the transfer of land from a firm beneficially owned by Satyendar Jain to the family members of other accomplices to “alienate the property and to frustrate the process of confiscation”, the ED said in a statement.

The agency also seized several incriminating documents and digital records from the premises. “The cash and gold from an unexplained source were found to be secreted in the said premises and were seized under the PMLA,” the agency said.

The ED had initiated the money laundering investigation based on an FIR registered by the CBI in August 2017 under the Prevention of Corruption Act against Satyendar Jain, Poonam Jain, Ajit Prasad Jain and his son Vaibhav, and Sunil Kumar Jain and his son Ankush.

The CBI filed a chargesheet in the case in December 2018, stating that Satyendar Jain, as a minister in the Government of Delhi between February 2015 and May 2017, had acquired assets “disproportionate to his known sources of income”. His wife and business associates – Ajit Prasad Jain, Sunil Kumar Jain and their sons – were also named.

This March, the ED had provisionally attached immovable properties worth Rs 4.81 crore of companies beneficially owned and controlled by Satyendar Kumar Jain.