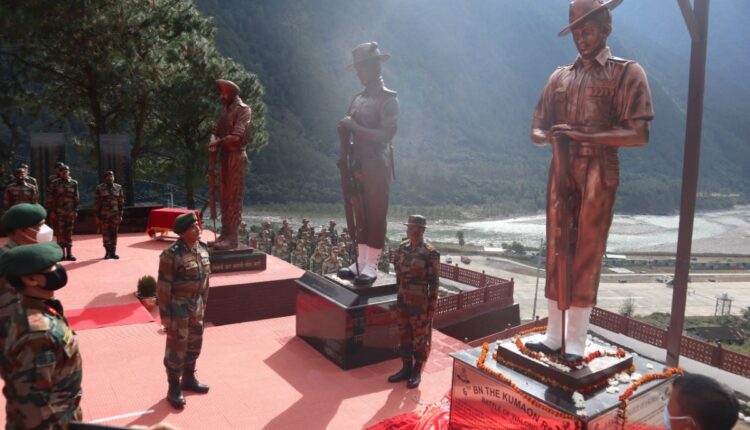 Itanagar: To remember the sacrifice and valour of the soldiers who fought in the India-China war in 1962, the Army has installed statues of the “Kumaoni Soldier” at the Hut of Remembrance at Kibithu and at Walong War Memorial in Arunachal Pradesh.

Lieutenant General R.P. Kalita, General Officer Commanding Spear Corps, Colonel of the Kumaon and Naga Regiments and the Kumaon Scouts, unveiled the statues of the “Kumaoni Soldier” on Friday.

Defence spokesman Lt. Col P. Khongsai said that  Walong, the easternmost valley in Arunachal Pradesh, witnessed the bloodiest battle better known as the “Battle of Walong” during the 1962  war. “The battle is remembered for the steely resolve, valour and unparalleled bravery displayed by the soldiers of the Indian Army despite numerous challenges.”

The event was made memorable by the presence of 79-year-old Subedar (Honorary Captain) K.S. Takuli (Retired), a braveheart of 6 Kumaon Regiment, who gallantly fought at this very location 58 years ago.Lt. Col Khongsai said that the presence of the war veteran along with dignitaries from civil administration, local headmen of Meyor and Mishmi villages, veterans of the Kumaon Regiment and a number of senior Army officers and Jawans was a befitting tribute to the valiant soldiers of 6 Kumaon regiment.

Lieutenant General Kalita talking to media brought out the significance of the event and said that 6 Kumaon Regiment was one of the five Infantry battalions which played a major role during that battle. “These statues symbolise the daredevilry of the bravehearts of 6 Kumaon who surpassed all limits of human endurance and soldierly valour while facing a formidable enemy in treacherous terrain and hostile weather conditions,” he added.