Bhubaneswar: Sports have played a key role in building unity and friendship between countries and seen to set an example. But some players seem to have been forgetting the true essence of sports.

Such an incident took place at the iconic Kalinga Stadium on Friday after the semi-final of the Hockey Men’s Junior World Cup between France and Argentina. After the defeat of France in the penalty shootout, the overwhelmed  Argentinian players were found behaving unprofessionally.

According to reports, after France’s Sellier Corentin failed to score the final penalty shot in the first attempt he lost his cool and hit the ball second time which irked the rival Argentina players. 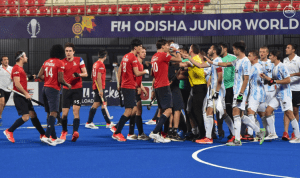 The Argentinian players, who were celebrating their victory, allegedly pushed Corentin. Soon, players from both teams entered into a scuffle on the field.

For a while, there was a lot of commotion in the field. However, the players, who went unruly, had to calm down after the referees intervened. Later the players of the two teams shook hands and the situation came under control.