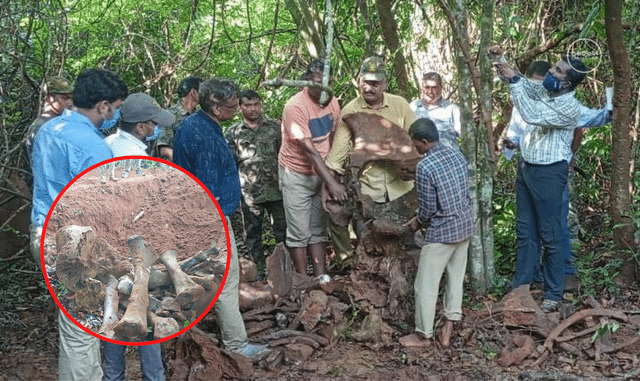 Badamba: The Special Investigation Team (SIT) of the Odisha Crime Branch Monday recovered another skeleton of an elephant buried in the Badamba forest range. The skeleton was reportedly exhumed from the Mandap reserve forest near Kushapala village under Gopapur section.

Preliminary investigations revealed that it was a skeleton of an adult female elephant, according to experts from OUAT Bhubaneswar. They speculate that the elephant’s body was buried about two and a half years ago. A large part of the skeleton has been collected at the behest of the higher authorities present to investigate the incident.

The Badamba and Narasinghpur forest ranges under the Athgarg forest division, have now turned into a haven for poachers and armed hunters which is evident from the seizure of elephant skeletons being exhumed with each day passing. As many as 10 people have been arrested concerning the cover-up of jumbo deaths while two watchers and a forest guard have been suspended from service.

It is pertinent to mention here that two watchers found to be involved in the case are still at large while eight watchers have been transferred to other places as disciplinary actions.