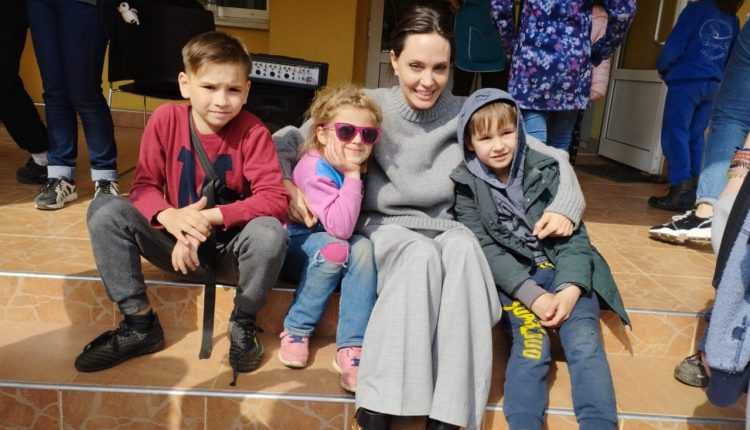 Kyiv: Angelina Jolie surprised the world as she was spotted in war-torn Ukraine. The Hollywood actress visited the Ukrainian city of Lviv as she met injured children and volunteers.

During her trip to Ukraine even as it comes under heavy fire from Russia, Angelina Jolie also visited the central railway station in Lviv to welcome the internally displaced Ukrainians arriving on an evacuation train from Pokrovsk, a city in Donetsk Oblast.

Ukranians and social media were blown away after Angelina Jolie turned up in Ukraine as pictures and videos of her at a cafe in Lviv went viral. Angelina Jolie has been a UNHCR Special Envoy for Refugees since 2011.

Lviv regional governor Maksym Kozytskyy said on Telegram that Angelina Jolie had come to speak with displaced people who have found refuge in Lviv, including children undergoing treatment for injuries sustained in the missile strike on the Kramatorsk railway station in early April. The attack in the eastern Ukrainian city appeared to deliberately target a crowd of mostly women and children trying to flee a looming Russian offensive, killing at least 52 and wounding dozens more.

Thank you Angelina Jolie for coming to Ukraine and visiting some of the incredible WCK chefs who cook every single day! We cannot forget the people of Ukraine… The world must keep doing everything we can to help! Hope you enjoyed the bograch soup! #ChefsForUkraine 🇺🇦 pic.twitter.com/5eWOq5ALKk

⚡️ Actress and filmmaker Angelina Jolie was spotted at a cafe in western Ukrainian city of Lviv on April 30.

Jolie is a special envoy for the United Nations High Commissioner for Refugees.