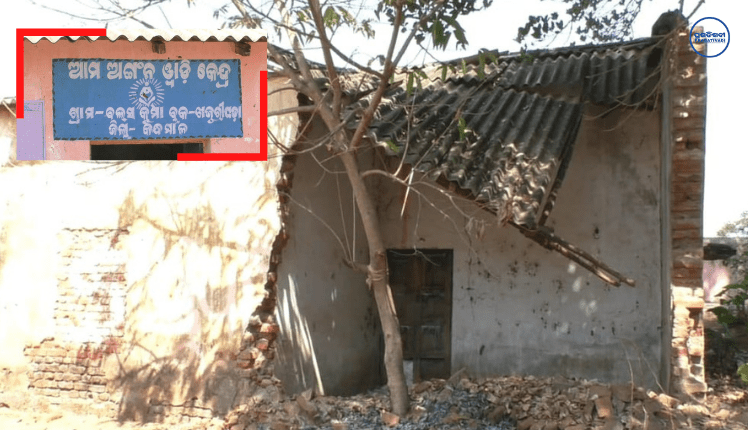 Phulbani: The State government has made several provisions to provide free education to all in Odisha and pumping in crores of rupees for the purpose. However, in the tribal-dominated Kandhamal district, the entire system seems to be in shambles.

The grim situation of an Anganwadi centre at Ward No-7 of Balas Kumpa Panchayat under Khajuripada block in Kandhamal district is an example. The wall of one side of the Anganwadi Center has collapsed. while the structure is in a dilapidated condition.

Lack of upkeep for several years has resulted in the pathetic condition of the Anganwadi centre where children are going for pre-school activities. Some parents have also stopped sending their children to the child care centre fearing that the walls may cave in anytime, sources said.

According to local residents namely Gokul Sahani, Sadananda Behera, and Rohit Behera stated that the Anganwadi Center was constructed in the village 35 years ago and due to the lack of maintenance, the walls have developed huge cracks. “Seeing the condition of the Aganwadi centre, parents are afraid to send their children to the centre,” they said.

Expressing displeasure, the villagers said that even though they have brought the matter to the attention of BDO, DSWO, Deputy Collector urging to construct a new building for the Anganwadi centre, no steps have been taken so far. “Such apathy of the government officials is risking the lives of small children, who come to the Aganwadi centre for pre-school activities,” the villagers stated.

When asked, Anganwadi worker Sandhyarani Jani said that the matter has been brought to the attention of the senior officials, but to no avail.

On the other hand, the villagers have said that the district administration will be held accountable in the event of any untoward incident in the Anganwadi Center. They have again urged the district officials to take immediately to safeguard the children.

Odisha Assembly To Meet For Around Five Hours Daily: Speaker