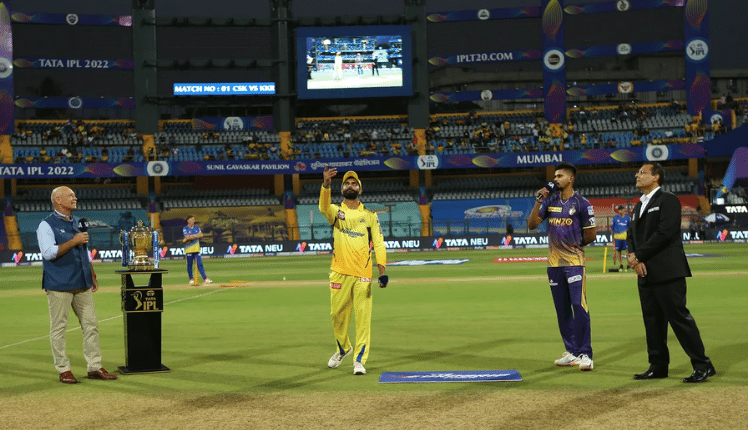 Chennai: The Indian Premier League is underway and early indications have shown us that toss could be a crucial factor.

All four games in the tournament so far have been won by teams batting second. Kolkata Knight Riders, Delhi Capitals, Punjab Kings and Gujarat Titans have all posted victories while successfully chasing down targets.

Multiple factors have played their parts in the trend of chasing teams winning. With matches starting at 7.30 pm, pacers have been able to get extra assistance in the initial phase before dew sets in. As MS Dhoni had pointed out in IPL 2021, that makes the job tougher for the batsmen in the first innings. And once the dew sets in, the bowlers, especially in the second innings, find life difficult.

“When you have dew in your mind and you are batting first, you want to get those extra 10-15 runs – that was normally in 8pm start games. 7.30 start means the opposition will have at least half an hour when there will be very little amount of dew on the field, which means it will not come on as nicely as it will in the second innings. So you have to score those 15-20 extra runs to make it even, and after that also you have to get early wickets to make a big mark on the game,” Dhoni had told Star Sports after the match against Delhi Capitals in Mumbai last year.

The brief numbers from the ongoing IPL show the trend too.

Following the season opener against Kolkata Knight Riders, skipper Ravindra Jadeja too had said that dew will play a key role this season.

“Dew will be the vital part in this edition. If you win the toss, you will look to bowl first. The wicket was a little damp in the first 6-7 overs and then it came on nicely in the back end of the innings,” Jadeja said.

Super Kings’ head coach Stephen Fleming said assessing conditions during the first part of the tournament is going to be key for the team.

“Conditions were quite tough. It was very wet the second half. Assessing conditions during the first part of the tournament is going to be a key aspect. Winning the toss as well,” said Fleming after the game against Kolkata.

Will the trend continue? We’ll wait and see!

As Jadeja and Fleming said, dew has become a deciding factor for games with other teams’ captains expressing their views about it as well.