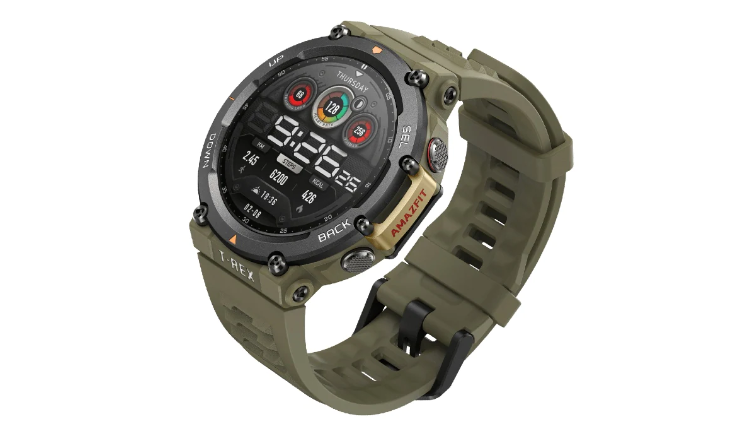 New Delhi: Huami has Launched Amazfit to T-Rex 2 in America. It will be available for pre-order in Europe. It features silicone straps. Apart from this, it comes with strong battery life. The company claims that up to 45 days of backup are provided with it. So let’s know its price and features. Read on to know more about the latest launched wearable.

The Amazfit T-Rex 2 is available on the Amazfit US site and its pricing starts from $229.99 (roughly Rs. 18,000). It is listed to offer Astro Black & Gold, Desert Khaki, Ember Black, and Wild Green colour options. This Amazfit smartwatch will be available in Italy, France, and Germany from June 1 for a starting price of EUR 229.9 (roughly Rs. 19,000).

Talking about the specification, the latest launched smartwatch features a 1.39-inch AMOLED touchscreen with a 454×454 pixel resolution. Moreover, it also has a rated battery of 500mAh which is claimed to take around 2 hours for a full charge. the company also claimed that this smartwatch can last for 24 days during normal use. It has a battery saver mode which is claimed to extend the battery backup up to 45 days.

Additionally, the company has packed the Amazfit T-Rex 2 smartwatch with dual-band positioning and support for a five-satellite navigation system. This smartwatch has been designed to offer military-grade durability. The company claims that the Amazfit T-Rex 2 can operate in extreme temperatures up to -30°C. In addition, it is 10 ATM water-resistant.

Amazfit T-Rex 2 can be used to measure blood oxygen. Apart from this, it includes more than 150 game modes and has been given ExerSense technology.

Light To Moderate Rainfall Likely In These Odisha Districts Today