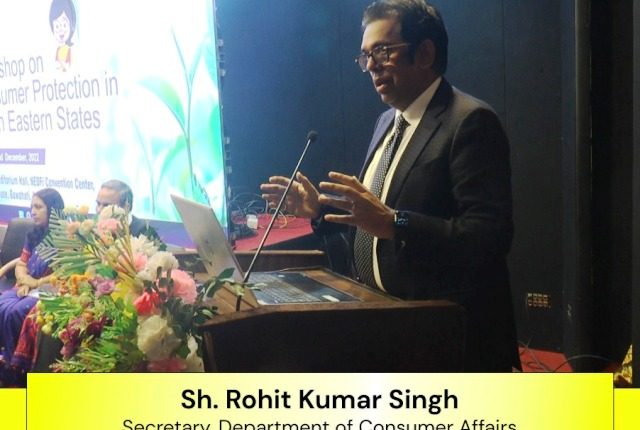 All states should establish price monitoring centres in all districts: Centre

He said that the Centre intends to achieve the target of having 750 price monitoring centres by March 31st 2023 for which financial support will be assured.

The Secretary explained that through Price Monitoring Division, the Centre is making all efforts to control prices of essential commodities thereby, keeping check over inflation. The Department of Consumer Affairs regularly generates data about price and has the system of collecting prices of 22 essential food commodities in the country.

The workshop was organised in association with Government of Assam to address the issues concerning consumer protection in North Eastern States.

The Secretary during his inaugural address informed how the Department, National Commission, State Commissions and District Commissions and the whole ecosystem in terms of quality, quantity, standards, testing and benchmarks through BIS, NTH, Legal Metrology and National Consumer Helpline are working together towards protection of consumer interests.

He further highlighted the role of Bureau of Indian Standards (BIS) as the National Standards Body of India, in developing Indian Standards and implementation of voluntary and mandatory standards such as Quality Control Orders and how through Legal Metrology and Weights and Measures consumers are assured that what is being offered, the quantity being offered is exactly same as claimed on the product.

It was assured that Department will provide its complete support to all State and District Commissions for having necessary infrastructure for effective functioning of consumer commissions as per the policy which states that 50% will be funded by State government and 50% will be funded by Central Government and requested all the representative of the State Government to provide its Utilisation Certificates of previous year, if pending, without which centre cannot release the funds for subsequent year.