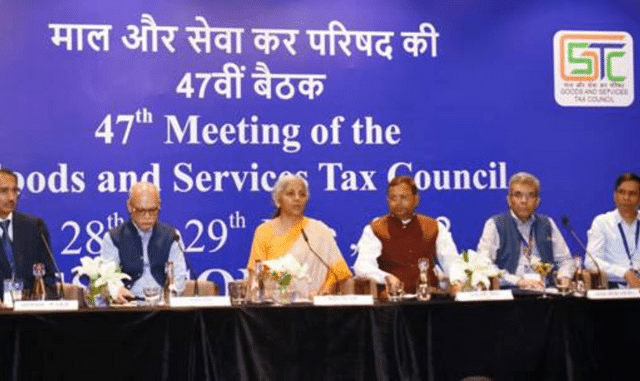 New Delhi: The 47th GST council meeting under the Chairmanship of Union Minister for Finance & Corporate Affairs Smt. Nirmala Sitharaman in Chandigarh ended today. The meeting was attended by the Union Minister of State for Finance Shri Pankaj Choudhary besides Finance Ministers of States and UTs and senior officers of the Ministry of Finance & States, UTs.

The finance minister spoke about rate rationalisation, the GST compensation to states, corrections of invested duties, and virtual digital assets. She said the Council directed that the Group of Ministers on Casino, Race Course and Online Gaming re-examine the issues in its terms of reference based on further inputs from States and submit its report within a short duration.

In the meeting, the GST on LED Lamps, lights and fixtures, and their metal printed circuits board is raised from 12 per cent to 18 per cent. In the case of the Solar Water Heater system GST was raised from 5 to 12 per cent whereas in the Works contract for roads, bridges, railways, metro, effluent treatment plant, crematorium,s, etc the tax was raised by 12 to 18 percent.

The tax also hiked in Works contract supplied to central and state governments, local authorities for historical monuments, canals, dams, pipelines, plants for water supply, educational institutions, hospitals, etc. & sub-contractor from 12 to 18 percent. Electric vehicles whether or not fitted with a battery pack, are eligible for the concessional GST rate of 5 per cent.

GST rate on Tetra Packaging has been raised from 12 to 18 percent. Cut and Polished diamonds are up from 0.25 per cent to 1.5 percent. All rate changes recommended by the 47th GST Council will be made effective from 18th July, 2022.

Rohit Sharma not ruled out of Birmingham Test yet, says Rahul Dravid