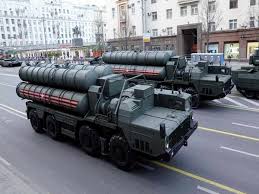 Washington: A US Congressional report has warned that India might attract US sanctions following its multi-billion dollar Russian deal to purchase S-400 air defence system.

The report is neither an official one of the US Congress nor reflect the view of Congressmen. But, this was prepared by independent experts for the lawmakers to take informed decisions.

India went ahead with the deal in October 2018 despite a warning from the Trump administration that it may invite US sanctions.

India had signed a USD 5 billion deal with Russia to buy five units of the S-400 air defence missile systems in 2019. The S-400 is known as Russia’s most advanced long-range surface-to-air missile defence system.

At a presser in the Indian Capital, New Delhi, last month, Russian ambassador to India Nikolay Kudashev appeared to criticise the US sanctions on Turkey for procuring the S-400 missile systems under a USD 2.5 billion deal.

He said Russia does not recognise or welcome unilateral sanctions as a language or tool or instrument of interstate or international relations.