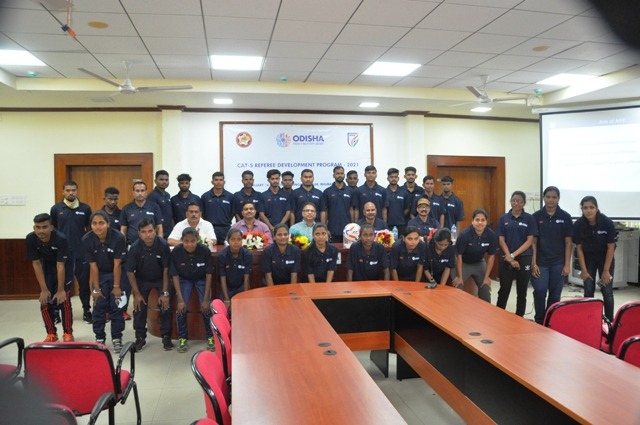 Bhubaneswar: There has been a rapid growth of football in the country in the recent years and Department of Sports and Youth Services has taken up several initiatives for the overall development of Football in the state, one being its collaboration with All India Football Federation (AIFF) and Football Association of Odisha (FAO) to promote footballers, coaches and referees. In this direction, the AIFF Cat 5 Referee Development Program that commenced today at Kalinga Stadium, Bhubaneswar and continue till the end of this month will benefit the participants immensely.

The first of three phases of the program led by AIFF instructors G. Murthi and Pijus Biswas saw participation from 18 men and 12 women, from different districts of Odisha.

Principal Secretary, Sports and Youth Services, Vishal K Dev, addressing the young gathering, said, “This program has been specially designed to benefit the former district and state-level football players of Odisha. An important part of the process is to have good quality officials in competitive games that are played in the State. Therefore, we decided to collaborate with AIFF and FAO in order to increase the number of qualified referees we have across the State. This would be an opportunity for all undergoing the courses to develop a professional career as a referee, which is fast becoming a viable career option due to increase in professional football played in the country (I-League, ISL, Indian Women’s League, Youth Leagues, Khelo India leagues, more international matches, etc.).”

This program is so designed so the former players can remain associated with the sport which they’ve played professionally and have tremendous passion for.

“We are committed towards the development of the sport of football in the State, and in the future, there will be more initiatives coming out which deal with other important aspects of football development, such as, coach education, competitions and more, Dev, added.

Speaking on the program and its association with Department of Sports and Youth Services (DSYS), Odisha, Secretary, Football Association of Odisha, Mr. Asirbad Behera, said, “It’s a great effort by the Department of Sports and Youth Services, towards the development of Football in our State, especially for those players who have retired from active football. This program will certainly help those players who want to pursue a career as a football match official and will also help them to earn a livelihood. Our sincere thanks to Shri Vishal Kumar Dev, Principal Secretary, Sports & YS and Tourism Dept. and Shri R Vineel Krishna, Special Secretary, Sports & YS, Odisha for their kind support in promoting Football in every nook & corner of our State.