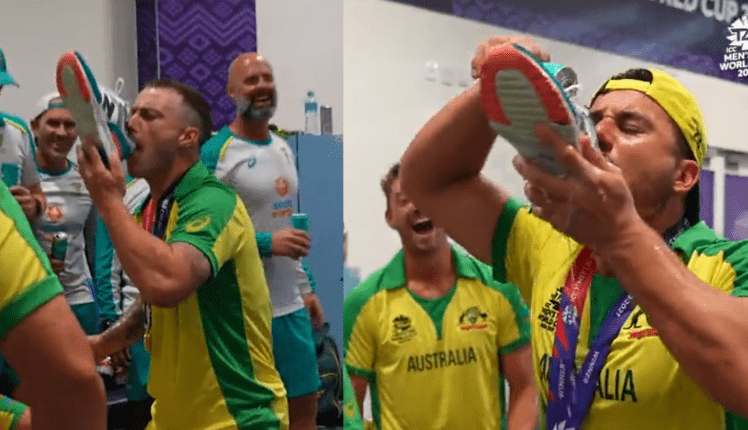 Dubai: As Australia won their first-ever T20 World Cup title on Sunday, the winners’ dressing room at the Dubai International Stadium bumped up with an extraordinary kind of celebration.

Wicketkeeper-batsman Matthew Wade and all-rounder Marcus Stoinis could be seen whipping out the ‘shoey’ amid celebrations.

In a video tweeted by the International Cricket Council (ICC), both the cricketers could be seen getting up from the floor after posing for a photograph and Wade then proceeds to pour some beer into his shoe and drink out of it.

The celebration has been made famous by Australian Formula One driver Daniel Ricciardo, although it has always been popular in the country before he did it for the first time after finishing on the podium in the 2016 German Grand Prix. The celebration caught on with Ricciardo doing it with fellow podium finishers and celebrities who were part of the ceremony.Wade and Stoinis were the heroes of Australia’s stunning win in the semi-final of the T20 World Cup. Wade won the match by hitting Pakistan pace spearhead Shaheen Afridi for three consecutive sixes in the 19th over. On Sunday, David Warner, Mitchell Marsh and Josh Hazlewood emerged as heroes on the big night in Dubai as Australia ended their 14-year-long wait for a maiden T20 World Cup trophy.

Australia had every major limited-overs trophy in their decorated cabinet (5 50-over World Cups and 2 ICC Champions Trophy crowns) but they had to wait long for glory in the shortest format of the game.

Panchayat Election In Odisha: Polling Time Extended By An Hour