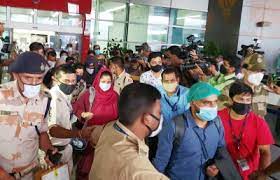 New Delhi: All of 78 people evacuated from Afghanistan by the Indian Air Force (IAF) on Monday were placed in quarantine upon their arrival in New Delhi.

This group included 25 Indian nationals and 53 Afghan Sikhs and Hindus.

The move came after two evacuees tested positive for Covid-19 on Monday. As the threat of a possible third Covid wave looms, the move will ensure that positive cases, if any, coming from Afghanistan are taken care of.

Amid the ongoing chaos and unrest in Afghanistan, the Indian government is continuously engaged in evacuating Indian nationals stranded in the war-torn nation.

Accordingly, a special Air India flight from Kabul landed at the IGi airport here on Tuesday carrying 44 Afghan Sikhs, who brought three copies of Guru Granth Sahib with them.