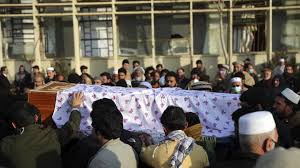 By PragativadiNews 1 On Dec 26, 2020 53
Kabul: Afghanistan rights activist Freshta Kohistani and her brother were gunned down in Afghanistan’s northeastern Kapisa province, confirmed the country’s interior ministry.
“At around 5:00 pm today [12:30 GMT], unknown gunmen riding on a motorcycle martyred Freshta Kohistani in Hes-e-Awal area of Kohistan district of Kapisa. Her brother was wounded in the attack. The intelligence units have launched an investigation into the attack,” the ministry said in a statement.
On Tuesday, journalist Rahmatullah Nikzad, the head of a journalist union in the Ghazni province, was killed, prompting both domestic and international outcry. On Wednesday, Yousuf Rasheed, the head of the Free and Fair Election Forum of Afghanistan watchdog, was killed by gunmen along with his driver.
Afghan women's rights activist Freshta KohistaniFreshta KohistaniInternational newslatest newsworld news
53
Share FacebookTwitterinWhatsAppTelegram