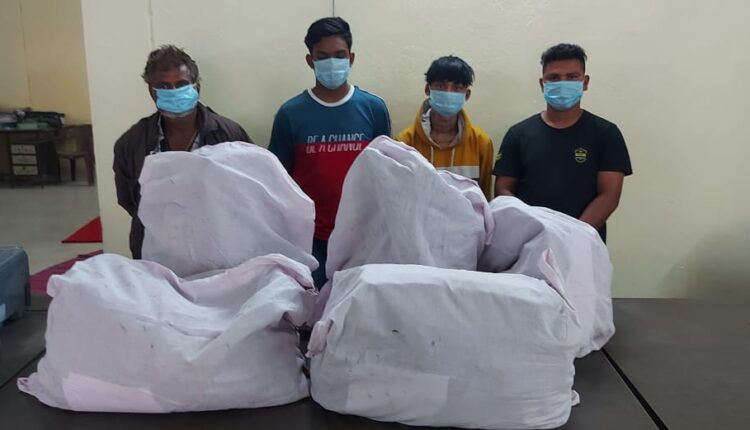 Sambalpur: Four persons have been arrested by Sambalpur Town Police on Monday on charges of smuggling adulterated cough syrups.

The accused were identified as Rocky Mukhi (25) of Thelkopada, Rahul Meher (19) of Marwadipada, Laxman Mishra (41) of Khetrarajpur and Chandan Patra (19) of Dherpada in Sonepur.

As per reports, the police received a tip-off that four persons in three bikes were en route to Sambalpur Town with adulterated cough syrups kept in an airbag to sell it to addicted persons.

Following this, Town Police and Special Squad jointly conducted a raid and apprehended the four persons and seized three bikes from them. On search, the cops found 183 numbers of loose Cough Syrup, 250 bottles of sealed Cough Syrup and 4 strips of seductive tablets  (10 in each strip ) from the airbag which was in their possession. They

“A case (11/ 21) has been registered under Sections 274/275/34 IPC/ R/w 21(c ) of the NDPS Act. All the accused persons were arrested and forwarded to the Court today. The case is under investigation,” read a press note issued by Sambalpur Town Police.