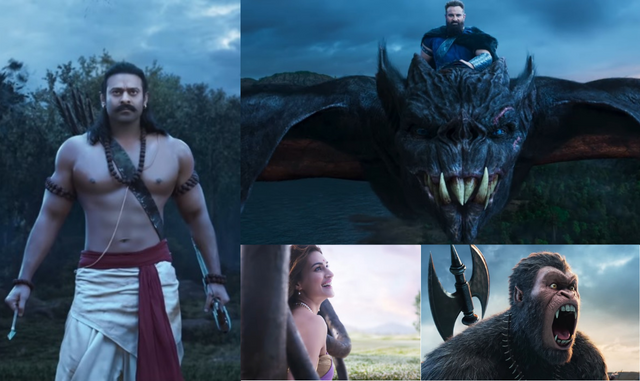 Adipurush Teaser Out: Prabhas-Starrer Gives A Glimpse Into The Epic Saga of Ramayan, But The VFX…

The makers of upcoming mythological film ‘Adipurush’ starring Prabhas, Kriti Sanon, & Saif Ali Khan on Sunday released the official teaser of the movie. The historical epic ‘Adipurush; is being promoted as a film that celebrates “the victory of good over evil”.

According to reports, ‘Adipurush’ is said to be one of the most expensive movies to ever be produced in India. The first official teaser shows extensive use of computer-generated imagery and visual effects. However, the VFX in the teaser looks somewhat glitchy and may deter the high expectations of the audience.

The teaser video opens with Prabhas meditating underwater. We can also see the first sight of Saif Ali Khan’s Lankesh look. In one of the shots, he is shown roaring with his 10 heads to a lady. There is also a fleeting view of Kriti Sanon’s look as Sita on a swing.

Om Raut is directing the movie while T-Series Films and Retrophiles are producing the film, which is being bankrolled by Bhushan Kumar, Krishan Kumar, Om Raut, Prasad Sutar, and Rajesh Nair under the banners of T-Series Films. The film is scheduled to be released in cinemas on the 12th of January 2023.