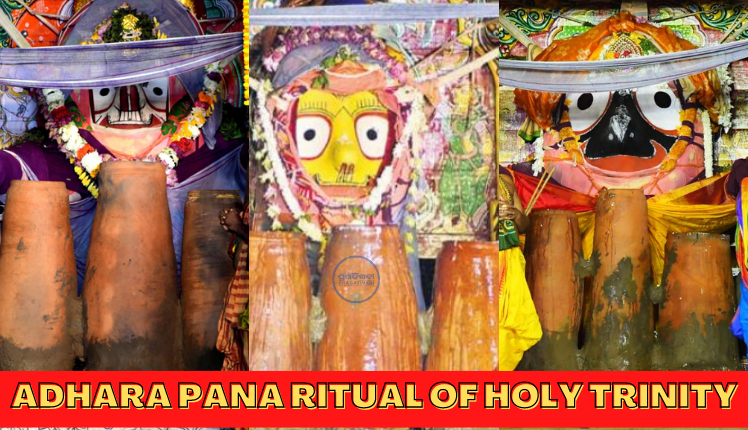 Puri: Lord Jagannath and his sibling deities Lord Balabhadra and Devi Subhadra were offered the sweet drink ‘Adharapana’ on their respective chariots as part of the ritual on Monday.

The Adharapana ritual was performed after the completion of Madhyana Dhoopa by the sevayats of Puri Srimandir with the congregation of devotees.

As per the age-old tradition, the special drink was offered to the Holy Trinity in nine cylindrical earthen pots reaching up to their lips, which is why the ritual is named as Adharapana.

The ingredients for the preparation of the sweet drink are cheese, milk, sugar, banana, camphor, nuts, black pepper. Then three earthen pots reaching up to the lips of the deities were kept on each chariot.

As per the tradition, Shree Jagannath Temple Administration and the authorities of Raghab Das Mutt and Badaodia Mutt arrange the clay pots from local potters, who use three sacks of fine soil and a sack of sand to make these. It takes them at least a month to shape three special clay pots for the ritual.

While Mahasuara servitors prepared the drink by mixing the ingredients with the holy water collected from a well in front of Chhauni Mutt near the Lions’ Gate of Srimandir, Patribadu, Suarabadu and Garabadu servitors performed the puja on the three chariots.

After a Bhog was offered to the deities by Palia Pujapanda servitors, the earthen pots were broken before the deities and the sweet drink was spilled away on the chariots.

It is believed that the spillover drink is for the subsidiary deities placed on the chariots, evil spirits and ghostly bodies. The evil spirits are satiated once they consume the Adharapana. Therefore, devotees are forbidden to partake the drink.