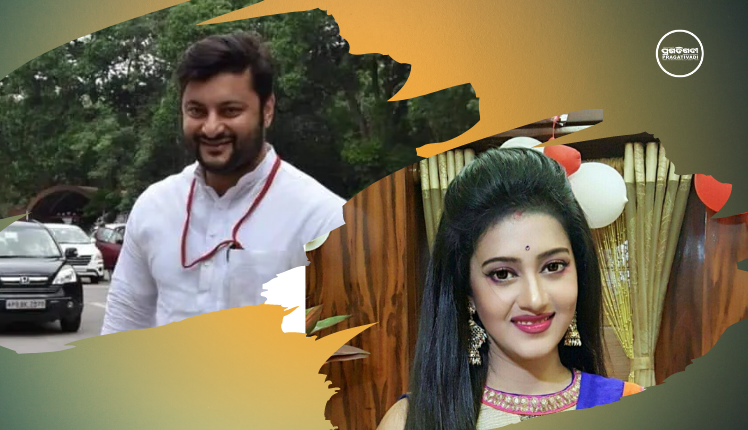 Cuttack: Social media have become the most flaunting weapon for everyone and YouTube has become the foremost popular among them. Anyone can display their emotions, activities, drama, acting skills, coking skills, hobbies, lifestyle etc.

No matter if you are a politician, actor, cricketer, administrative officer or a spiritual leader, Social media clamp everyone’s attention.

Recently the actor-turned-politician Anubhav Mohanty released a video titled ‘untold story’ in which he spelt the beans about the discord with his estranged wife Varsha Priyadarshini.

On Saturday, the Kendrapara MP again broke down before the netizens and poured his heart out over his ‘failed’ marriage with actress Varsha Priyadarshini.

Mohanty claimed that Varsha had denied keeping a physical relationship with him after their marriage in 2014 which led to the most vital point of the marital discord.

“I was staying separately from Varsha since a long time ago filing the petition. I was upset with her behaviour after marriage and tried my best to calm her but failed. Varsha always claimed that I had forced her into a physical relationship but as her husband was not that my emotion? I am requesting everyone who is watching this video, kindly do not take my words on the wrong note. I am talking about the most sacred relationship which is a husband-wife relationship and in such a relation physical intimacy plays a very vital role which was deprived of me,” Mohanty said.

In the video, on his YouTube channel, Anubhav got all weepy while speaking about his estranged marital relationship.

“Varsha filed the case under the ‘Protection of Women from Domestic Violence Act in the court of Cuttack SDJM under Section 12 for allegedly assaulting and harassing her. Anyone can read that petition where her every word is contradicting each other. Varsha also said that I am a habitual drunkard and often drink with my friends at home and alleged that whenever she tried to prevent me from drinking, I would get violent and physically assault her. She even alleged that I had tried to throw her out of the house but now who is living in that house throwing us out of the house? The truth will always be proved and will fight till the end,” he lamented.

“She had even alleged that I have extramarital affairs with multiple women from the Odia film industry and accused me of being a womanizer. If I am the real villain, then why did you marry me, why did you live with me those eight years. I know what is your intention behind doing all these nonsense things. You deliberately said no… you want to stay in your in-law’s house… yes you want to stay because you want your in-law’s property. The people who are watching me and feeling my pain, would know the actual truth and I thank everyone who is standing with me even in this tough situation,” he added.

While social media platform users have also seen showing their sympathy for Anubhav regarding the matter, some others also went hard on the MP, saying the ‘latter is acting’.

At the end of the video, the actor has written: As demanded and requested by people, this video has been uploaded. Please watch the full video to know the truth or the untold reality behind the marital discord between Anubhav Mohanty and Varsha Priyadarshini!

ALSO READ: Not All Men Are Bad & Not All Women Are Good: Actor Turned MP Anubhav Breaks Down In Social Media Post

Reportedly, Varsha Priyadarshini had filed a case of domestic violence against Mohanty in the SDJM court in Cuttack in September 2020.

The case was filed under Section 12 of the Protection of Women from Domestic Violence Act against the MP for allegedly assaulting and harassing Varsha. In her petition, Varsha had appealed to the court seeking maintenance from Anubhav.

He has also said, “REQUEST ALL TO WATCH THE FULL VIDEO AND GIVE YOUR VALUABLE OPINIONS.