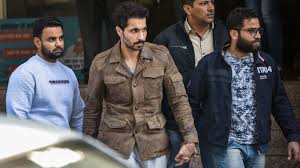 New Delhi: Police have taken actor-activist Deep Sidhu to Red Fort for recreation of the events of Republic Day during the farmers’ tractor parade.

Another accused Iqbal Singh was also taken to the Red Fort, police said.

Police said the actor is a “prominent player” behind the January 26 violence at Red Fort. He was arrested from Karnal bypass in Haryana on Monday night by the Special Cell of Delhi police. Sidhu is remanded to policy custody for seven days.

Sources said the police team is expected to inspect the spot to ascertain their role in R-Day violence.  Singh who carries a reward of Rs 50,000 on his arrest, was caught from Hoshiarpur in Punjab on Tuesday night.

Delhi police had announced a cash reward of Rs 1 lakh for information that can lead to the arrest of actor  Sidhu, Jugraj Singh, Gurjot Singh and Gurjant Singh who raised flags at the Red Fort or were involved in the act.

A cash reward of Rs 50,000 each was also announced for Buta Singh, Sukhdev Singh, Jajbir Singh and Iqbal Singh for allegedly instigating demonstrators. Some farmer groups have accused Sidhu of attempting to derail their movement.