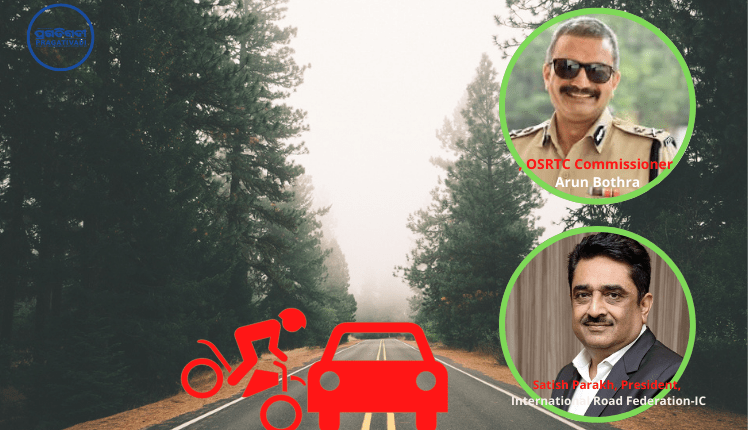 Bhubaneswar: About 30,000 bystanders on the roadside community including Eateries, small repair shops, Fuel Stations, Police personnel, etc. shall be trained on First Aid Pre-hospital trauma care to assist the accident victims within the Golden Hour on National and state highways in the state of Odisha.

“The six-month campaign to train the roadside community on National and state highways will begin from November 8 next month   Provision of first aid pre-hospital care within the golden hour as well as strengthened medical facilities will greatly enhance the chance of survival of the accident victim. Rupees Two crores have been sanctioned for the project by the state government ” Said Mr. Arun Bothra, Commissioner, Odisha State Transport Corporation while speaking at the webinar on ‘Enforcement Innovations for Road safety’ organized by the India chapter of International Road Federation (IRF) a global body working for safer and better roads worldwide.

“Other than enforcing the law on traffic violations the road engineering and related agencies should also be taken into consideration. In Odisha, each year about 350 black spots on national and state highways are spotted and the concerned authorities informed. Most of them are removed or rectified on paper and the same Black spots are spotted again next year. Now the state government has deputed a dedicated team of experts to remove the black spots. For improving licensing a two ay online and offline training and education has been mandatory for obtaining a driving license. The state government has tied up with Red Cross for training which includes First aid.” said Mr. Arun Bothra.

“India accounts for more than 11 percent of the global road accident deaths mainly due to absence of safety measures. Many fatalities and serious injuries on Indian roads could have been saved if recommended road safety actions had been implemented, United Nations has set a global ‘Decade of Action’ plan for Road Safety which aims to reduce road fatalities by 50 percent till 2030 and Indian Road Transport and Highway  Minister Mr. Nitin Gadkari has set the year 2025 as a target for reducing road deaths by 50% “ said Mr. Satish Parakh, President, International Road Federation, India chapter (IRF-IC) while speaking at the webinar.

“International Road Federation, India Chapter (IRF-IC) has embarked upon an on-ground Road Safety initiative covering Seven worst affected highway stretches of 150-200 km each in the 7 States with highest road accidents including Uttar Pradesh, Madhya Pradesh, Maharashtra, Tamil Nadu, Rajasthan, Kerala, and Karnataka. The objective of the exercise is to transform these highway stretches, in association with the State Governments, into forgiving roads with almost zero fatalities and serious injuries.  The transformation is intended through a series of corrective road safety management measures addressing the Es of road safety including, Engineering, Education, Enforcement and Emergency Care,” said Mr. Parakh.