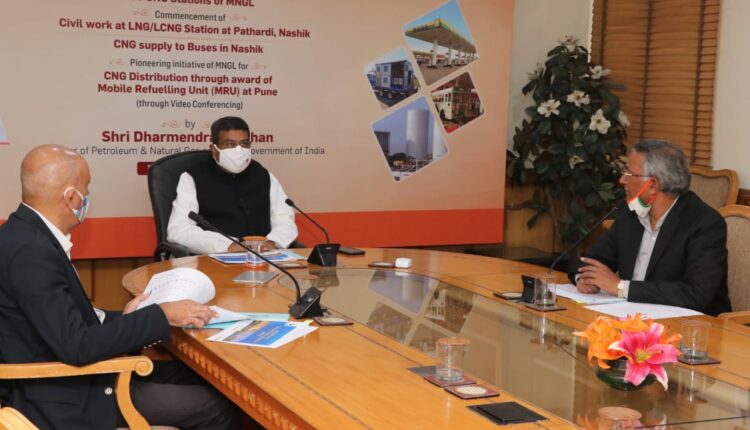 The Minister said it is a big step towards AatmaNirbhar Bharat. He said government of India plans to invest Rs. 10,000 crore in the next three years in setting up 1,000 LNG Stations in India.

Inaugurating the Nation MNGL’s 5 stations through Video Conference on Tuesday that took the company’s CNG stations to one hundred, Pradhan said the government is committed to achieve 15% share of natural gas in the primary energy mix by 2030 for a more sustainable energy use.

The Union Minister also inaugurated the commencement of civil work at LNG/CNG station at Pathardi, Nashik, Maharashtra, CNG supply to buses in Nashik, and CNG distribution through award of Mobile refuelling Unit (MRU) at Pune.

Pradhan said the greater use of natural gas will reduce dependence on fossil fuel and consequently reduce import bill and import dependence. The Minister added that the energy transition roadmap will drive self-reliance and create large-scale employment.

Pradhan said that CGD sector has emerged as a major industry for natural gas consumption. The demand is only going to increase as more GAs become operational and consumption increases in domestic, transport, commercial and industrial sector of CGD networks.

The Minister said that foundation stone for India’s first 50 LNG Fuel stations spread across Golden Quadrilateral and all major National highways with co-existing LNG based CNG stations was laid recently.

Speaking on the occasion the Secretary, Ministry of PNG, Tarun Kapoor, said that the government is providing full support for setting up of CNG/LNG stations in the country and called upon the companies to expedite their plants.