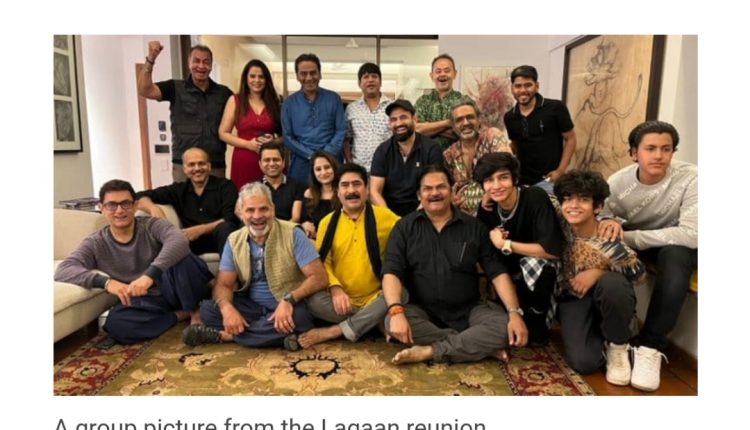 Mumbai: Aamir Khan’s film Lagaan completed 21 years on Thursday and the superstar celebrated the big day by hosting a party at his residence. ‘Lagaan’, which was released on June 15, 2001, is one of the most successful films made in Indian cinema.

It is one of the three Indian films to be nominated for the Oscars and Academy back then. Aamir Khan Productions shared a video on its official social media handle in which the ‘Lagaan’ team including Ashutosh Gowariker, Pradeep Rawat, Yashpal Sharma, Daya Shankar Pandey, Akhilendra Mishra, and Rajesh Vivek Upadhyay were seen interacting with each other. The video played the song ‘Chale Chalo’ from the film in the background.

On Friday, Aamir Khan’s production house shared a video of the intimate celebrations of the Lagaan team. It was shared with the caption, “#21YearsOfLagaan.”

In the clip, Aamir, Ashutosh Gowariker, actors Yashpal Sharma, Akhilendra Mishra, Rajendranath Zutshi and others are seen interacting with each other. Former Indian cricketers Irfan Pathan and Aakash Chopra were also a part of the celebrations. Shankar Pandey, Raja Awasthi, Suhasini Mulay, Pradeep Ram Singh Rawat, and Amin Gazi also marked their presence at the gathering.

Irfan commented on the video, “What a lovely evening.” A fan wrote, “so adorable.” Another wrote, “what a wonderful idea to meet after years, what fun it has been..love from turkiye.” One more said, “Lagaan family plus Irfan Pathan!!! What a spetacular reunion!!!”

‘Lagaan’ holds a sentimental value for Aamir Khan and the entire team. Back in 2021, amidst the Covid-19 pandemic, the star conducted a virtual gathering to commemorate the 20 years of its release.

But this time, the entire star cast came together to celebrate the evergreen film. Gracy Singh, Raghubir Yadav, Rajendranath Zutshi, Raja Awasthi, Suhasini Mulay, and Amin Gazi were among others who marked their presence at the personal gathering. Former Indian cricketer Irfan Pathan and Aakash Chopra were also seen having fun at the gathering.