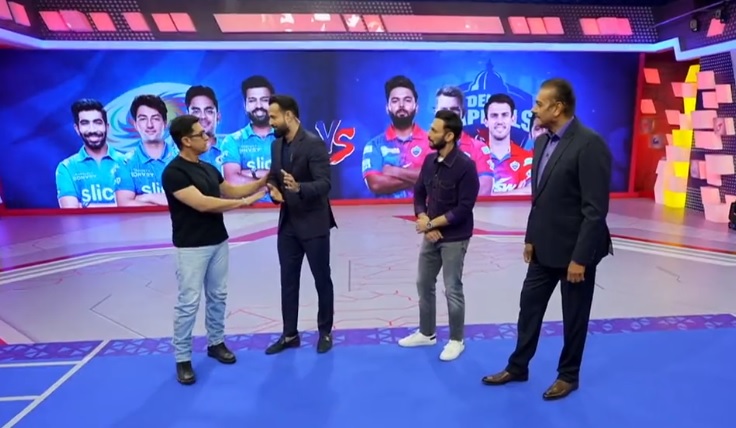 Aamir Khan Catches Irfan Pathan Off-Guard, Convinces The Former Indian Cricketer To Give Him A Chance In A Fun Banter On Star Sports

Mumbai: After impressing ‘Tracer Bullet’ Ravi Shastri with his unique ‘foot movements’, ‘Mr. Perfectionist’ Aamir Khan proved he’s a perfectionist at charming people too. The Bollywood superstar visited the Star Sports studios and his trademark quirky banter managed to convince Ravi Shastri as well as former Indian pacer Irfan Pathan to allow them to prove his credentials as a cricketer.

Aamir first visited the Star Sports English studio where he showed Ravi Shastri, part of the broadcaster’s commentary panel for the ongoing Tata IPL 2022, a new video of his improved footwork and got a thumbs up from the ‘Champion of Champions’. During his witty conversation with Ravi Shastri, Aamir even complained about the ‘harsh comments’ from Irfan Pathan and Harbhajan Singh as the duo tried to pull a fast one and questioned his cricketing credentials.

During the ‘Cricket Live’ show on Star Sports, Harbhajan and Irfan – also part of Star Sports’ commentary panel for the Toughest T20 League – watched the video of the Bollywood superstar, who is seen plying his trade with cricket on a rooftop terrace. The duo advised Aamir to stick to his acting saying cricket isn’t his cup of tea.

After analyzing Aamir’s footwork, Irfan said on Cricket Live, “There are retakes in acting but not in cricket. You have to face fast bowlers, leg-spinners, mystery spinners and not an under-arm bowler in real cricket. So, my suggestion to Aamir bhai is that you focus on acting and leave cricket to us.”

Harbhajan quipped, “Even I wish to become an actor like Aamir Khan, but is it possible? No. So, Aamir bhai, acting suits you, not cricket.”

Aamir on Saturday left Irfan Pathan stumped with his sudden arrival at the Star Sports studio and caught him off guard with his flurry of questions.

With Ravi Shastri by his side, Aamir said in jest, “Yaar Irfan, I am very disappointed with your comments. You said I am suited to acting. Do you know who was the first captain of India and slammed a century on debut? Bhuvan. I played the lead in Lagaan. Give me a chance yaar.”

Aamir’s quirky comments left Irfan in splits and said, “Aamir bhai, I am a big fan of your acting but cricket, I am not sure.” Aamir then urged Ravi Shastri to lend his support, to which the former Indian captain quipped, “Irfan, just look at his sideways movement. He could be a good cricketer, just give him a chance.”

Watch: Aamir Khan convinces Irfan Pathan to give him a chance in cricket https://twitter.com/StarSportsIndia/status/1528027313207750657?t=zLCyasaMMvp4G0nVMuq1Ig&s=08

Earlier. on Thursday, in a video posted on Star Sports’ social media handles, while showcasing his skills, Aamir made a passing remark to Ravi Shastri saying, ‘IPL mein chance hai kya (do I have chance to feature in the IPL)?’ he said. When asked by anchor and commentator Jatin Sapru about Aamir’s cricket skills, Shastri had said, “Hey Jatin, he looks in good nick. Probably needs to spend a little more time on his footwork, but should get into most teams.”

The quirky banter didn’t end there. The actor’s production house – Aamir Khan Productions – posted a video on Friday which featured him pretty disheartened after Shastri’s analysis. The tweet also rallied behind Aamir with #AamirInMyTeam, encouraging fans to add the actor in their respective teams.

“Ravi, I am a little disappointed that you are not happy with my footwork. I don’t think you have watched Lagaan,” Aamir said. “Don’t think you’ve had a proper look – now look at me again,” said the actor and broke into a dance move with an aim to prove the point that his footwork is top-notch! “Please recommend me to someone,” he added.

Their conversation is receiving many plaudits and responses from viewers and fans alike.

Catch all the banter on BYJU’s Cricket Live ahead of the Tata IPL 2022, 6.30 PM onwards on the Star Sports Network & Disney+ Hotstar VIP