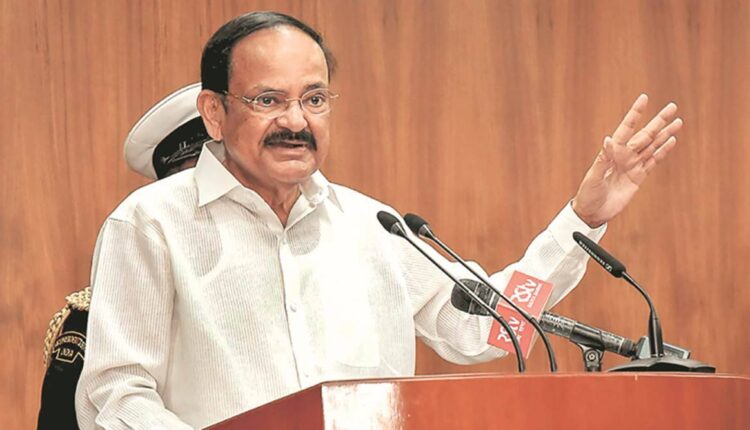 A strong and vibrant democracy cannot survive without a free and fearless Press: Vice President

New Delhi: Vice President M. Venkaiah Naidu today stressed that a strong and vibrant democracy cannot survive without a free, unfettered and fearless press. Suggesting that India needs a robust, independent and vibrant media to strengthen the roots of democracy, Shri Naidu cautioned against the erosion of values in the media. Calling for unbiased and objective reporting, ‘News should not be mixed with views’, he stressed.

Addressing a gathering at the Press Club of Bangalore to mark the Club’s 50th anniversary year, the Vice President observed that a free and fair Press complements an independent judiciary when it comes to strengthening the constitutional rule of law.

Noting that in the past, journalism was considered a mission in which news was sacrosanct, Shri Naidu underscored the fact that good journalism hinges on unbiased and truthful coverage of events and in their credible transmission to the people.

Referring to several legendary news editors of yesteryears like Khasa Subba Rau, Frank Moraes and Nikhil Chakravarty, the Vice President said they never coloured news with their opinion and always respected the Lakshman Rekha between news and opinion. He suggested that news professionals today should take inspiration from journalism stalwarts who contributed immensely during the freedom struggle and during the Emergency. Stressing that news must not be tempered with views, he advised media persons never to compromise on facts and to always present them without fear or favour.

Expressing concern over the steep decline in journalistic standards over the years, Shri Naidu said that the recent rise of social media has only muddied the waters further. “Today, we find news constantly fused with opinion. So much so that sometimes one tends to feel that neither newspapers nor television channels give an accurate picture of some events,” he added. He suggested that the Parliament and the government look into the matter of fake news on social media and come up with an effective and reliable way to deal with fake news.

Drawing attention to biased news presentation and agenda-driven coverage of events, the Vice President said that the practitioners of such journalism are doing a grave disservice to their profession because authenticity and credibility form the cornerstone of journalism.

Expressing his concern over falling standards of public discourse, Shri Naidu wanted political parties to self-regulate themselves by adopting  a code of conduct for their members in legislatures and in public life. He advised public representatives to refrain from making personal attacks on their political adversaries. He also called for a relook at Anti-Defection Law to address any shortcomings.

Kia announces its entry into India’s EV market; to bring EV6 to India in a limited quantity