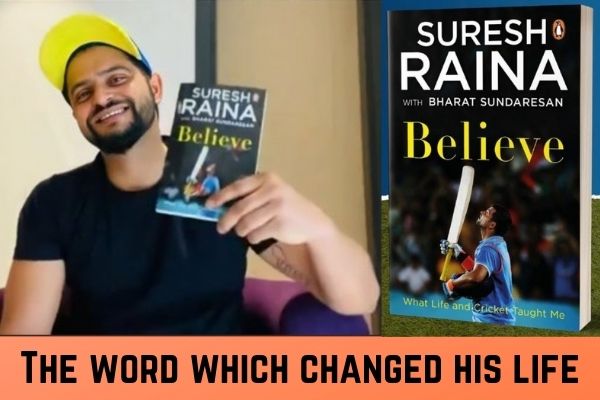 A Sneak Peek Into Suresh Raina’s Autobiography ‘Believe: What Life And Cricket Taught Me’

India is a sports-loving nation and when it comes to the term Cricket, people leave every work and throng to the television sets and start supporting their favorite player.

This is not the end of their dedication as there are so many instances of cricket followers worship the cricketers like Gods and follow their each and every sense.

Cricketers, who have written their books, basically their biographies have always made well contribution to motivate the young ones.

Whether it is Sachin Tendulkar’s ‘Playing it my Way’, Captain Cool: The M.S. Dhoni Story, or Former Indian captain Anil Kumble’s book ‘Wide Angle’, every book made their special impact on the cricket lovers.

In such a cricketer is Suresh Raina, one of India’s most successful international cricketers, has published his own memoir ‘Believe: What Life and Cricket Taught Me’ along with cricket writer Bharat Sundaresan.

‘Believe’, the word Sachin Tendulkar told him-and he took it to heart, getting the word etched on his arm as a tattoo.

In this book, Raina takes you through the challenges he faced as a young cricketer. He was bullied in school and at cricket camps, but he always punched above his weight, overcoming every adversity life threw at him and never giving up.

This is the story of the lessons he learnt and the friendships he built. Peppered with invaluable insights about the game and about life-that Raina acquired from senior colleagues like Rahul Dravid, Anil Kumble, Sachin Tendulkar, and Sourav Ganguly among others, this book will make you believe in the power of hard work, love, luck, hope, and camaraderie.

It takes us through the highs and lows of the cricketing career of a man who saw his world fall apart and yet became one of the most influential white-ball cricketers India has ever seen.

He announced that the memoir was made by publisher Penguin Random House India and is expected to be out on June 14, 2021.