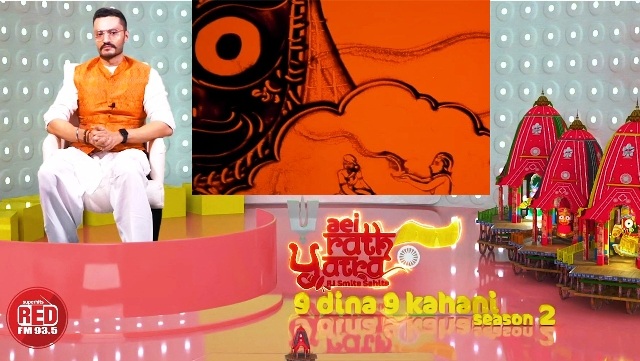 Bhubaneswar: Lord Jagannath sees everything through his all-seeing eyes and when a true devotee is entangled through difficulties and hardships, the Lord appears through vision and helps him wade through.

Do you know, how the all-mighty Lord Jagannath saved his devotee Yashwant Das on various occasions and why once the smell of dry fish emanated from the Sanctum Sanctorum of Srimandir. Let’s know this mythological episode on the concluding day of “9 Dina 9 Kahani”.

The All-mighty Lord Jagannath has always been very close to all his devotees and has time and again come to their rescue whenever they prayed to him.

One such devotee was Yashwant Das, who was amongst the five members of the famous friend’s group also known as the PANCHA SAKHA group.

Such was his devotion for the Lord that once when he stole grains from the king’s field with his friends and was caught, it was the Lord who not just rescued him, but the king when he saw the Lord himself through Yashwant Das, got his daughter married to him as well.

But as it has been seen, the true devotees of Lord Jagannath have always lived in poverty, and in spite of being married into royalty, Yashwant Das preferred life in a humble hut.

The Lord once again came to his rescue when in order to make his Rath Yatra journey possible, the all mighty gave him his own kundals which he could sell to see the Rath Yatra and when the king’s detectives caught hold of him, once again the lord appeared in the dream of the king and told him about how the kundals were given to Yashwant Das by him only.

But the most extraordinary tale of this bonding was when the temple of Lord Jagannath smelt of non-veg dry fish and inspite of all the search and cleaning no one was able to find out the reason why?

The Lord himself appeared in the dream of the head priest and told him that like a true devotee Yashwant Das had this habit of offering his food to him first and because of that, owing to the insistence of his wife, he had bought a dry fish and before consuming as an offering he first gave it to him and since he was a true devotee the Lord could not refuse it even if it was a nonveg dry fish.

Such is the strong bonding between the lord and his devotees!

With this, Season 2 of ‘9 Dina 9 Kahani’  concludes with nine unique stories that are centered around Lord Jagannath. In case you missed an episode, click the following links to read the stories.

Tips To Keep In Mind Before Buying Mangoes