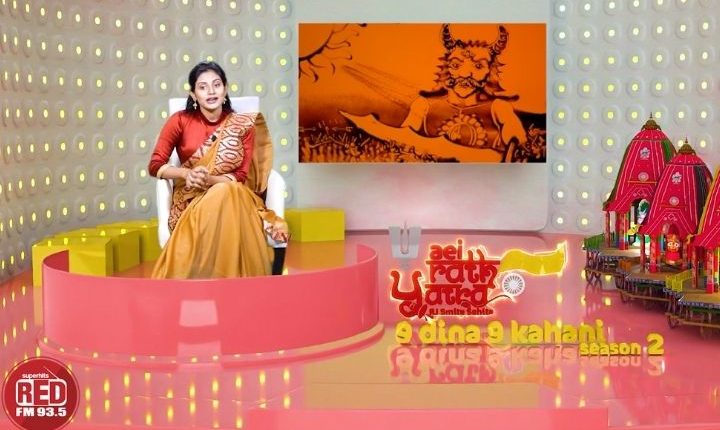 Bhubaneswar:  Lord Jagannath is worshipped in different forms on different occasions and has the attributes of all the incarnations of Lord Vishnu. The Lord is frequently identified with Lord Shree Krishna, the eighth avatar of Lord Vishnu, who is a central character in the Mahabharata.

The world-famous Puri Rath Yatra has begun Monday. Today, Lord Jagannath, Lord Balabhadra, and Devi Subhadra will proceed towards the Gundicha temple (a monument built in the memory of the Queen of Indradyumna) from the Puri shri Story Behind Mighty Karna’s Invincible Kavach & Kundalne (built by King Indradyumna) on their giant wooden chariots.

To mark the nine-day-long annual sojourn of the Holy Trinity, 93.5 Red FM has started Season 2 of ‘9 Dina 9 Kahani’, where the people will come to know about nine stories that are centered around Lord Jagannath and his incarnations.

We all know so many stories about Mahaveer and Daanveer, and who was also considered as one of the foremost warriors at that time but did we know that while Karna was born out of Sun God and given to Kunti the mother of the Pandava’s he was actually a demon who went by the name Kavachasur?

This demon for thousands of years had traumatized not just humans, but also other Gods and Devatas because of the invincible boon given to him by Sun God, which allowed him to have a Kavach or Shield with 1000 feathers and if anyone had to kill him, then he had to not just do penance for a 1000 years but also fight him for another 1000 years and this would result in one feather falling off and only after all the 1000 feathers would fall off his shield would he lose his power of being invincible and die.

Lord Jagannath in the form of Vishnu cut himself into two parts – Nar and Narayan who in turn fought this Kavachasur for 1000 years and when Kavachasur. was left with only one feather, he took refuge under Sun God, and finally took birth as a human in the form of the mighty Karna with that Kavach with one feather intact and with a set of Kundals given to him by Sun God to make him invincible and the mightiest warrior in the planet.