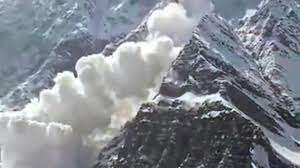 New Delhi: At least eight people were killed after a glacier broke triggering an avalanche close to the Indo-China border in Uttarakhand on Friday, officials said.

“384 persons have been rescued so far. Six of them are critical and currently under medical treatment. Eight bodies have been recovered. Rescue operation in progress,” the Indian Army said.

According to reports, the avalanche, which followed a glacier burst incident near the India-China border, hit a Border Roads Organisation (BRO) detachment and two labour camps in the area.

The BRO was working on repairing a damaged road in the area.

Chief Minister Tirath Singh Rawat conducted an aerial survey of the area on Saturday and said that the National Disaster Response Force (NDRF) had been deployed and rescue operation was underway. However, connectivity remains affected, he said.

COVID Vaccine For Above 18 Yrs: Here’s How To Register