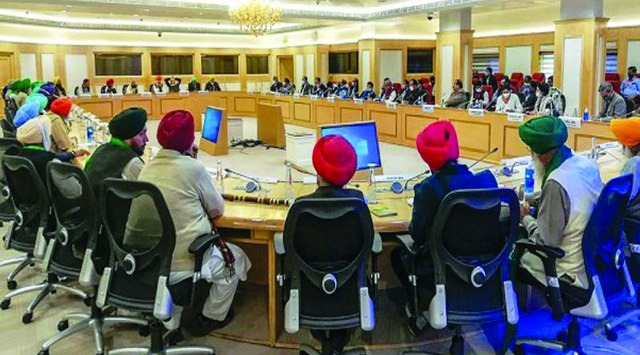 7th round of Govt-farmers talks ended without result

New Delhi: The seventh round of talks between the government and the agitating farmers ended inconclusive on Monday. The next meeting will be on January 8.

Reports said the farmer leaders insisted on the repeal of the three contentious farm laws.

Unlike the last round of talks on December 30, the ministers did not join the union leaders for the langar food. The union leaders will also have their own meeting on Tuesday to decide their next course of action.

The  two sides did not even discuss another key demand of farmers for a legal guarantee to the Minimum Support Price (MSP) procurement system.

Worthwhile to mention that thousands of farmers from Punjab, Haryana and western Uttar Pradesh are agitating at various Delhi borders for over a month against the three farm laws.

The agitating farmers have been toiling despite heavy rains and waterlogging at protest sites over the last couple of days. The farmers are also braving the biting cold in the capital region.

Union Agriculture Minister Narendra Singh Tomar, Railways, Commerce and Food Minister Piyush Goyal and Minister of State for Commerce Som Parkash, who is an MP from Punjab, are holding the talks with the representatives of 41 farmer unions at the Vigyan Bhawan.

The sixth round of talks on December 30 was held between the government and the farmer unions, where some common ground was reached on two demands — decriminalisation of stubble-burning and continuation of power subsidies.

However,  no breakthrough could be reached on the two main demands of the protesting farmers, repeal of the three recent farm laws and a legal guarantee to the MSP procurement system.

The government had sent a draft proposal to the protesting farmer unions with eight amendments to the new laws and a written assurance on the MSP procurement system. Reports said the government has ruled out a repeal of the three agri laws.

The All India Kisan Sangharsh Coordination Committee (AIKSCC) in a press statement condemned police action against protesting farmers in Punjab and Haryana.