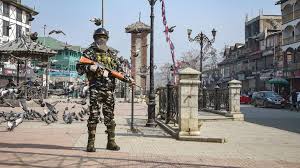 Jammu: A 7 kilogram Improvised Explosive Device (IED) was recovered and detonated on Sunday from a bus stand in Jammu, averting a major tragedy on the second anniversary of the 2019 Pulwama attack.

A man, who belongs to the Pulwama district, has been arrested in connection with the recovery, said an official.

This incident comes after the arrest of two top terrorists from Kunjwani and Bari Brahmana areas of the Union territory respectively.

Zahoor Ahmad Rather, a terrorist associated with The Resistance Front (TRF), was arrested from the Bari Brahmana area of the Samba district on Saturday. He was wanted in connection with the killing of three Bharatiya Janata Party (BJP) workers and a police official in south Kashmir last year.

Earlier on February 6, self-styled commander of the Lashkar-e-Mustafa (LeM), Hidayatullah Malik, alias “Hasnain”, was held from the Kunjwani area of Jammu.

Worth mentioning, Pakistan-based Jaish-e-Mohammed carried out the dastardly attack on a CRPF convoy of 70 vehicles in Pulwama, resulting in the death of 40 jawans.