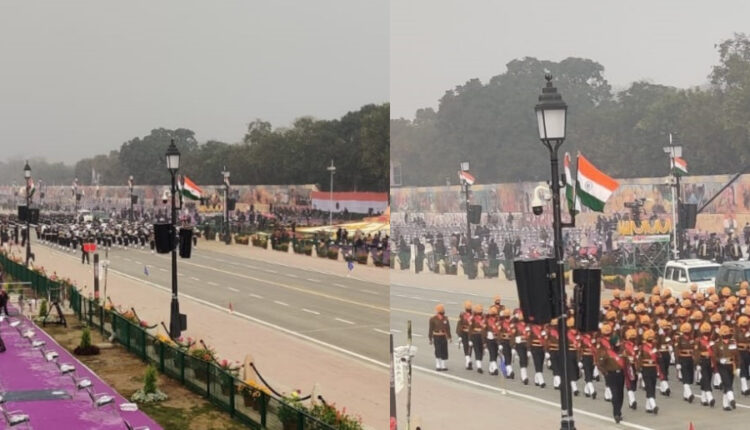 73rd Republic Day: Nation To Witness Many Firsts At Rajpath

New Delhi: India is celebrating its 73rd Republic Day today. To mark the occasion, the Ministry of Defence has conceptualised a series of new events during the parade on Rajpath.

According to a government release, for the first time, an Indian Air Force (IAF) will show a grand flypast of 75 aircraft or helicopters.

Among other things, a show by 1,000 indigenously developed drones has been planned for the ‘Beating the Retreat’ ceremony to be held on January 29, along with projection mapping that will be shown for the first time at the Republic day parade.

Also, for the first time, 480 dancers who will perform during the cultural programme at the parade have been selected through a nationwide Vande Bharatam dance competition.

Further, special arrangements have been made to minimise the risk of the virus’ spread. As part of the measures, only double vaccinated adults/one-dose vaccinated children above 15 years will be allowed entry at the parade. It will be mandatory for everyone to follow Covid-19 precautions.

Out of the 21 tableaux that have been selected for the Republic day parade, 12 states and a union territory will display its pride.

The parade ceremony will begin with Prime Minister Narendra Modi’s visit to the National War Memorial, who will lead the nation in paying solemn tributes to the fallen heroes by laying a wreath.

According to tradition, the National Flag will be unfurled followed by the National Anthem with a booming 21-gun salute. The parade will commence with President Ram Nath Kovind taking the salute. This would be followed by distribution of the gallantry awards.

To mark the Republic Day event this year, which also coincides with the 75th year of Independence, the government decided to make it a week-long event starting from January 23. From this year onwards, the celebrations will begin on January 23, the birth anniversary of Netaji Subhas Chandra Bose, and culminate on January 30, which is observed as Martyrs’ Day.