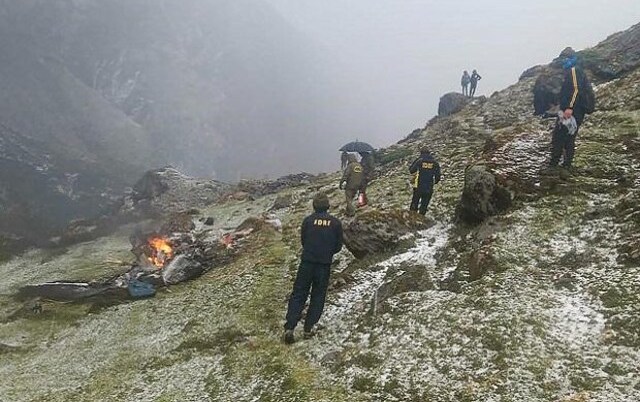 Rudraprayag (U’khand): A helicopter ferrying pilgrims from Kedarnath temple to Guptkashi here crashed into a hill due to poor visibility on Tuesday, killing all six pilgrims and the pilot on the spot.

The chopper — Bell 407 (VT-RPN) and operated by Aryan Aviation — burst into flames at around 11.45 am at Dev Darshini in Garud Chatti, Rudraprayag District Disaster Management Officer Nandan Singh said.

Teams from the National Disaster Response Force, disaster response forces of Uttarakhand and Delhi, and police brought the bodies to the Kedarnath helipad.

“The news of the death of many pilgrims, including the pilot, in the helicopter crash near Kedarnath Dham is very sad. My deepest condolences to the families who lost their loved ones,” Murmu tweeted in Hindi.

“Anguished by the helicopter crash in Uttarakhand. In this tragic hour, my thoughts are with the bereaved families,” Modi was quoted as saying in a tweet by his office