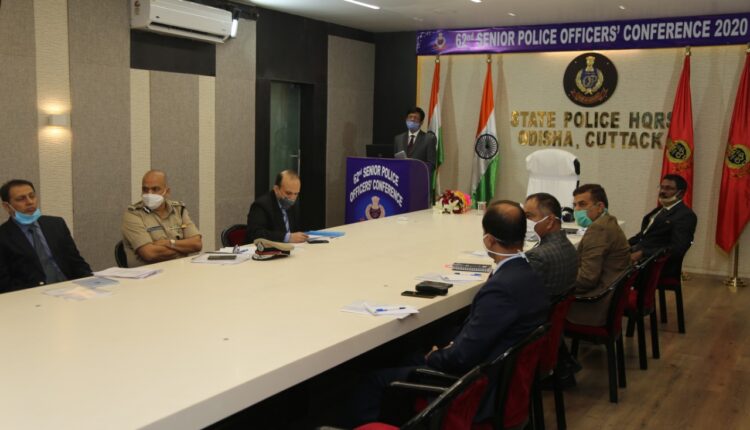 More than one hundred Senior Police Officers from different Police Establishments including District SsP and Commandants of Battalions are participating in the conference.

On the inaugural day, detailed discussions on LWE scenario in the state were held by Director Intelligence, IGP Operation, DIG SIW as well as SsP of Malkangiri, Kandhamal and Kalahandi and strategies planned for future. During 2020, major successes included the neutralization of 17 Maoists leaders and cadres, arrest of 34 Maoists and surrender of 21 Maoists. Establishment of 3 COBs (Hantalguda, Jodambo and Gurasetu) and operationalization of Jodambo PS from Jodambo (20.06.2020) has brought about 80% of Swabhiman Anchal under police cover.

A detailed review of law and order situation was held by Addl.DGP, L&O and Director Intelligence.

Review of Crime Scenario was carried out ADG, CID, CB followed by presentations on detection of food adulteration by DCP, Cuttack, combating illegal activities in mining and coal industry by SP Keonjhar and SP Angul.

A special session focusing on “Challenges of Quality Investigation” and “application of 5T” was held with presentations by DCP Cuttack on the successful detection of IIFL Gold Robbery case, SP Ganjam on Jewellery theft detection case, SP Berhampur on IPL Betting case and DCP Bhubaneswar on the detection of Bank robbery cases in Bhubaneswar.

The session on Road Safety was led by Transport Commissioner and IGP Crime with field-based observation by SP Sundargarh on challenges on Road Safety.

The session on “Challenges of Drug Trafficking” was highlighted by DIG, STF who spoke in detail about the seizure of Brown Sugar during the year 2020. SP Koraput and SP Nawarangpur also spoke on the detection & seizure of Ganja and financial investigation on Narcotic cases. During the year, 1200 + quintals of Ganja seized, 18000+ acres of illegal cultivation of cannabis destroyed and 34 kg of Brown Sugar seized which was a record detection by Odisha Police.

There will be presentations on the “Use of Forensics and Technical Aids” for improvement of quality investigation and discussions on 5T Policing in the state late today evening.