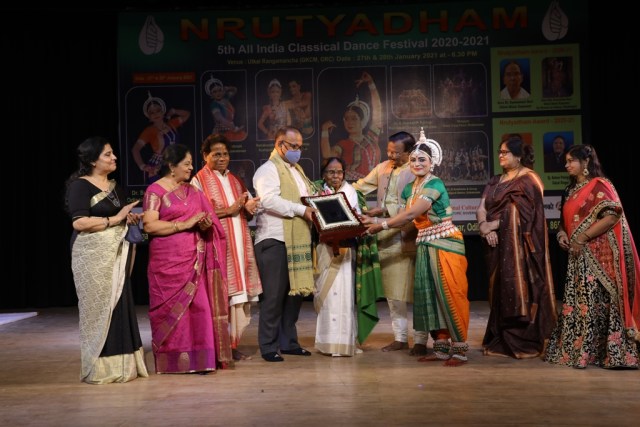 Bhubaneswar: The 5th edition of two-day Nrutyadham’s Ancient Dance Festival concluded on Saturday evening. Several dancers and dance groups from across the country participated in the grand event.

In an effort to keep our people in touch with exotic legacy of body language on rhythm innovated by our ancient Gurus, this show was organised at Utkal Rangamanch of Guru Kelucharan Mohapatra Research Centre, Bhubaneswar.

This genre-defying ancient-themed event was soul-stirring for the audience with dancing stars from across the country conjuring up stories, sweet and serene, with their taps and tunes.

The twin performances delivered by Guru Dr Subhashree Patnaik with beats and notes of Odissi on both days were a sheer treat for eyes of viewers.

Flirtation of Radha and Sri Krishna was the theme that she portrayed on the canvas of her fluently flexible body and vibrantly expressive face. Choreographed by Guru Durga Charan Ranbir, the score of this dance was composed on lines from the connoisseur Kabichandra Kali Charana Pattanaik. Enactment of Sriradha asking Srikrishna about secrets of how he plays his flute so enchantingly, by her, was so fresh and lively that gave a feel of heavenly happiness to those watching it. And the performance of the story of the courtship of Radha and Krishna based on the song of Kabi Samrat Upendra Bhanja under the guidance of Guru Durga Charan Ranbir, by her on the second day, was also equally majestic. The artistic innovation and the depth of emotion that she added to her taps and gestures could mesmerize all.