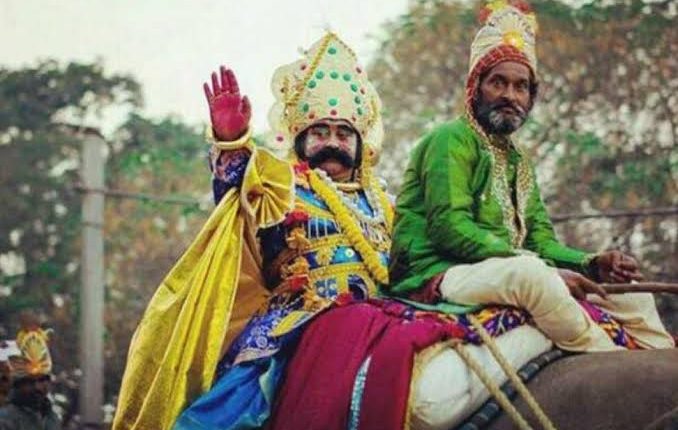 Bargarh: The famed ‘Dhanu Yatra’ here, known to be the world’s largest open-air theatre, turns 75 this year and one of its kind contest is being keenly fought for the role of the demon king Kansa of Mahabharata as 57 actors have applied for it.

Gopal Sahoo, an Odisha police officer who played the role of the tyrannical maternal uncle of Lord Krishna for as many as 23 years, bows out this year as he turns 60.

A man of huge physique and a stentorian voice, he is famous across the state for his acting in ‘Dhanu Yatra’.

Two other actors in the festival too have reached the age of superannuation and will be replaced, the Dhanu Yatra Mahotsav Committee said.

There are aspirants for other roles too in the festival. In fact, a record 223 actors are vying for roles in the 11-day festival that is set to begin on December 27 after a gap of two years of the COVID-19 pandemic, it said.

The ‘Dhanu Yatra’, which marks the victory of good over evil, came into existence in this west Odisha town in 1947-48 to celebrate the country’s Independence and is held annually since then.

Among the applicants this time, 22 have applied to play the role of Mahamantri Vidur, four for Satyaki, 17 for Akrura, 14 for Lord Narada, seven for Ugrasen, the father of King Kansa, eight for the role of Devaki, Lord Krishna’s biological mother, and 17 for his father Vasudev.

The artistes will be selected by a jury on the basis of their demo performance at the Town Hall here.

The importance of the role of King Kansa in ‘Dhanu Yatra’ is that during its duration of 11 days he rules the town, which then is transformed into his capital Mathura and its residents become his obedient subjects.

There is no written script. The entire drama is based on ‘Harivamsa Purana’ which chronicles the early life of Lord Krishna.