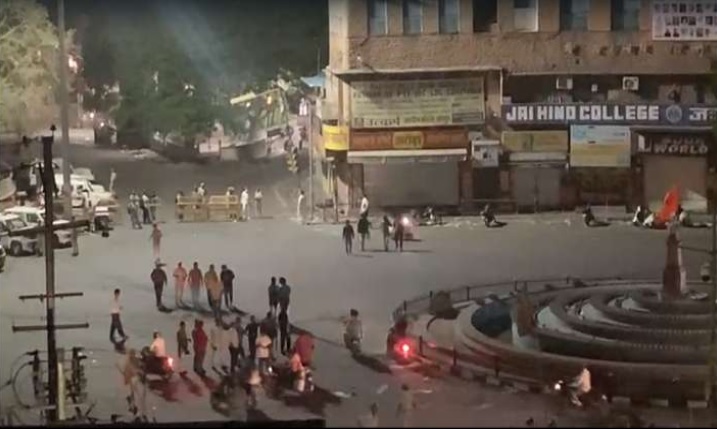 Jodhpur: At least four policemen were injured in the early hours of Tuesday following communal tension that broke out in Jalori Gate area here.

On Monday, a dispute started over the removal of the Hindu flag and installation of a Muslim flag at the Jalori Gate intersection. A banner was also put up near Jalori circle and a loudspeaker was installed.

As per reports, people of one community started raising slogans after a flag was put up on the statue of freedom fighter Bal Mukund Bissa and a banner related to Eid was strung up on the circle at Jalori.

The demonstrators removed the flag and banner, causing an uproar. The members of the other community got angry and clashes broke out between the two groups.

Stones were pelted from both sides, vehicles were damaged.

The police resorted to lobbing tear gas shells to bring the crowd under control.

In the incident, as many as four policemen were injured.

Meanwhile, the Chief Minister asked the people to uphold brotherhood and called the incident unfortunate.

“While respecting the tradition of love and brotherhood of Jodhpur, Marwar, I make a touching appeal to all the parties to maintain peace and cooperate in restoring law and order,” he said in a tweet.

Urfi Javed Says She’s Getting ‘Rape Threats’, Calls Out Media For Criticism Over Her Fashion