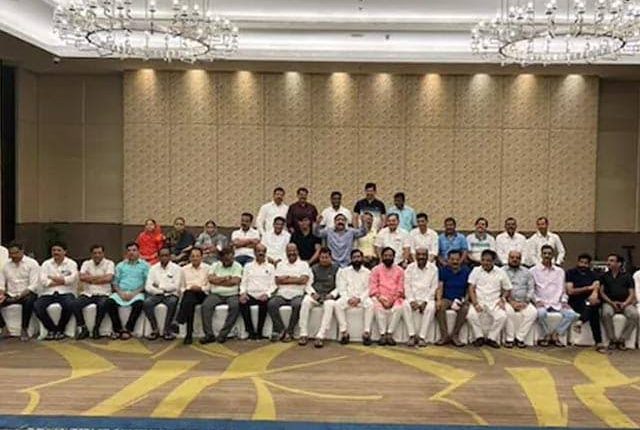 Mumbai: The Maharashtra crisis peaked with 37 Shiv Sena MLAs of the Eknath Shinde faction writing to the Governor and Deputy Speaker, naming him the legislature party leader and completely sidelining Uddhav Thackeray in the party founded by his father.

Shinde’s explosive move comes shortly after Team Uddav Thackeray fought back, filing disqualification applications for 12 rebels with the Deputy Speaker, which may help tweak the numbers in the Assembly in case of a trust vote. Eknath Shinde has argued that the application is illegal.

Eknath Shinde has reached the critical number of MLAs, 37, required to split the party in the assembly without falling foul of the anti-defection law. His total strength is now 42. Two more MLAs, Dada Bhuse and Sanjay Rathore and one MLC, Ravibdra Fathak, had joined his team in Guwahati last evening.

After holding internal meetings, the Congress and Sharad Pawar’s party — alliance partners of Shiv Sena in Maharashtra – said they were with Mr Thackeray. “We will fight together. The MVA will stay together,” senior Congress leader Mallikarjun Kharge said.

Eknath Shinde has demanded the Sena break its alliance with the Congress and the NCP, saying this was diluting its Hindutva ideology and that the party leaders suffered the most in the last two-and-a-half years of the coalition rule.

Uddhav Thackeray has been reduced to a minority chief in the party founded and led for decades by his father, Bal Thackeray. In an emotional message to the rebels on Wednesday, he said, “If my own people don’t want me as Chief Minister, he should walk up to me and say so… I’m ready to resign… I am Balasaheb’s son, I am not after a post”.

Khalilagi Ekadasi in Odisha – Know Its Significance Before Rath Yatra