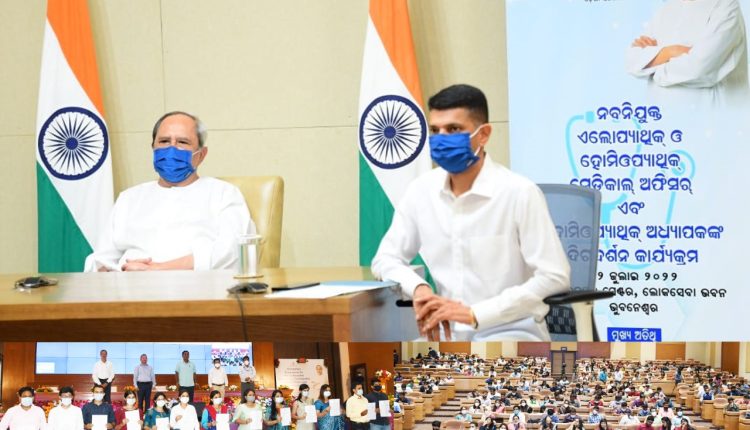 Congratulating the recruits on a virtual platform, Chief Minister Naveen Patnaik called upon them to make their profession a mission for Sustha Odisha – Sukhi Odisha. He hoped that the appointment of such a large number of Medical Officers will make the healthcare system more robust and effective.  It will also contribute to improving the satisfaction of the people who visit the Government facilities, he added.

Stating that Sustha Odisha, Sukhi Odisha” is our mission and ‘every life is important, has been the guiding principle of his government, the Chief Minister added that our objective is to provide quality and affordable health care to all the 4.5 crore people of Odisha.

Patnaik further said that our Government is committed to providing universal access to quality healthcare services and bringing down the out-of-pocket expenses of the people.

Focussing on the state’s budgetary allocation for the health sector, he said that the size of the budget of the Health Department is increasing over the years. The budget provision during the financial year, 2019-20 was more than Rupees six thousand eight hundred crores which have been increased to more than twelve thousand crore rupees in the year 2022-23. This is more than six per cent of the State Plan, he emphasised. The budget size has doubled in the last three years.

Bringing attention to the 5T initiative of the government, he said that Transparency, Technology, Teamwork, Time and Transformation are the fundamental principles of our governance model. People are the soul of democracy and every public servant is mandated to serve them with dignity, he underscored.

Minister Naba Das described doctors’ jobs as a noble profession. He highlighted the state’s success in Covid management and said that it has brought an international reputation to the state. He asked the doctors to work with commitment and dedication.

Chief Secretary Suresh Chandra Mohapatra highlighted the state’s achievement in the health sector. He said people in rural areas have high expectations from doctors. So they should work to live up to their expectations.

Secretary to CM (5T) VK Pandian interacted with the new doctors and deliberated on the CM’s guiding principle of governance, which is ‘ Every life precious ‘. He said CM is working towards this from day one. Be it food security, be it disaster management, Odisha has shown the world how it’s working to save the life of its people. He called upon the doctors to follow the same principle for saving the life of every person who comes to them for treatment. He also asked them to follow absolute transparency while serving people.

Principal Secretary Health Shri Nikunja Dhal in his welcome address highlighted the steps taken to the improvement of health infrastructure in the state. Director Ayush offered a vote of thanks.