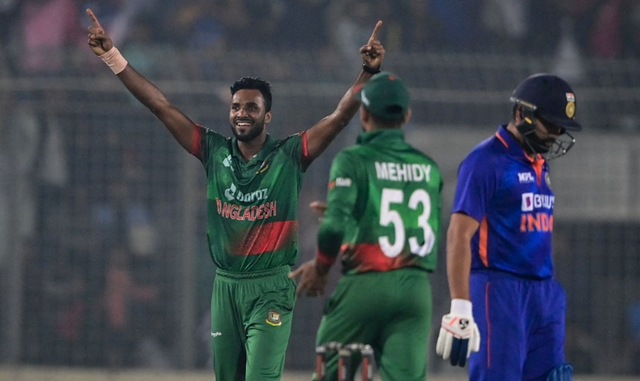 Rohit Sharma’s valiant unbeaten half-century went in vain as Bangladesh outclassed India to win the series 2-1. This is Bangladesh’s second consecutive win at home against India.

The injured India skipper hammered a brilliant unbeaten 51 off 28 balls but Bangladesh held their nerve to beat India by five runs and script a historic series win.

Earlier in the game, Litton Das won the toss and elected to put runs on the board which went horribly wrong as Bangladesh found themselves reeling at 69/6. But their rising star, Mehidy Hasan and the ever-experienced Mahmudullah stitched together a big 148-run stand that completely turned the game on its head with Mehidy going on to score his maiden ODI century off the final ball of the innings.

Mohammad Siraj, Umran Malik, Shardul Thakur and Washington Sundar all bowled well in patches but the trio of seamers got a bit of stick in the death overs which ruined their figures.

With 272 runs to win and keep the series alive, India struggled to get out of the blocks with the middle order left with a bit too much to do. The likes of Shreyas Iyer, Axar Patel and the ailing Rohit Sharma tried their best but Bangladesh held on to make it 17 wins out of the last 20 ODIs played at home.

India would be pretty disappointed with that effort in the end. First, they let go of a brilliant start with the ball and ended up with a pretty big score to chase down, and then they lost early wickets as well. With the score being 65/4 at one stage, it was a brilliant 107-run stand between Shreyas Iyer and Axar Patel that brought life back into the Indian chase.

Once Iyer fell though, Axar couldn’t stay on for much longer. The injured Indian skipper did come out to bat with 7 or so overs remaining and smashed 51* runs off 28 balls but unluckily for him, it just wasn’t enough.