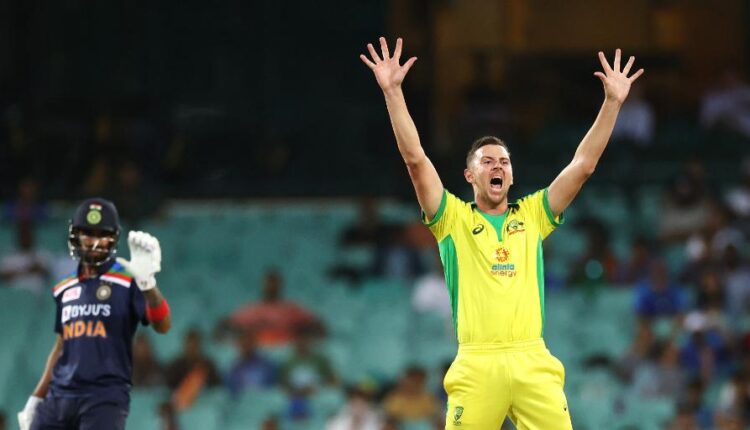 Sydney: Australia beat India by 51 runs in the 2nd ODI of the three-match series at the Sydney Cricket Ground this evening. The 3rd ODI will be played on December 2 in Sydney.

After setting a target of 390 runs, Australia restricted India to 338 for nine in 50 overs. For India, Captain Virat Kohli was the highest scorer with 89 off 87 balls. With this win, Australia also won the 3-match series.

Earlier, Australia posted 389 for 4 in the stipulated 50 overs after electing to bat. For the hosts, Steven Smith was the highest scorer with 104 off 64 balls. In the opening game of the three-match series on Friday, Australia defeated India by 66 runs.

In a record ODI score against India, Australia posted a daunting 389/4 in their 50 overs, with all of the top-five batsmen reaching 50 – just the second time ever that the feat has been achieved in ODIs.

David Warner, Aaron Finch, Smith, Marnus Labuschagne and Glenn Maxwell all got in on the action to create a mammoth total and despite impressive knocks from Virat Kohli and KL Rahul, India fell short by 51 runs.

Australia’s opening pair of Warner and Finch continued to prove their worth at the top of the order, as they put on 142 before Finch was caught by Kohli off Mohammad Shami, and Warner fell soon after, run out for 83 thanks to a pinpoint direct hit from Shreyas Iyer. Finch and Warner now have the most 100-plus partnerships against India in ODIs for Australia, with the latest being their fifth.

Smith, fresh off his century in the first ODI, then clattered a 64-ball 104 before he perished in the 42nd over, caught by Shami off Hardik Pandya.

Labuschagne kept up the fine work with 70 from 61 until Mayank Agarwal caught him off the bowling of Jasprit Bumrah, but a late cameo from Maxwell saw the Aussie finisher blast four fours and four sixes en route to 61* from 29 balls, as the hosts amassed 389/4.

In reply, Agarwal and Shikhar Dhawan put on 58 for the first wicket before Josh Hazlewood had the latter caught by Mitchell Starc for 30. Pat Cummins had Agarwal caught behind for 28 shortly after to leave the visitors with plenty of work to do if they were to complete the second-biggest ODI run-chase of all time.

Kohli and Iyer tried to up the run-rate and with 153 on the board in the 24th over, Smith took a superb catch off the bowling of Moises Henriques to send Iyer on his way for 38.

Another sublime catch, this time from Henriques, gave Hazlewood his second wicket – and an important one in skipper Kohli who had to go for 89.

Rahul tried his best to give India hope as he dispatched four fours and five sixes in a 66-ball 76, but when Hazlewood caught him off the bowling of Adam Zampa, the game was all but over.

Hardik Pandya struck 28 while Ravindra Jadeja hit two big sixes on his way to 24 in just 11 balls, but Cummins removed both in consecutive balls to pave the way for a comfortable Australia win.

Maxwell and Zampa picked up the late wickets of Shami and Bumrah respectively as India reached 338/9, but it was Australia’s day – and series – as their 51-run win saw them go top of the ICC Cricket World Cup Super League.

The teams will meet again for the third and final ODI on Wednesday, with 10 more crucial Super League points up for grabs.

HUMAN OAK made during Covid-19 to have world premiere at Olympia Film Fest, Greece