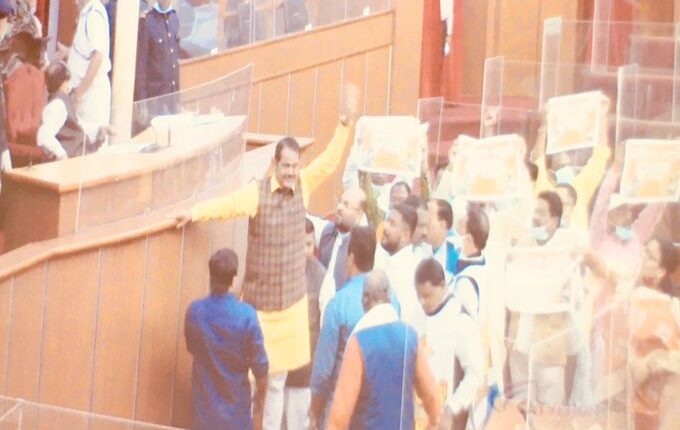 2nd Day Of Budget Session: Odisha Assembly Adjourned Till 11.30 AM

Bhubaneswar: The second day of the Odisha Assembly’s Budget session ( 2021) began on a stormy note as Opposition legislators created ruckus in the house over various issues.

As BJP & Congress MLAs continued to disrupt assembly proceedings over several issues, Speaker Surjya Patro adjourned the proceedings till 11.30 am.

On the second day of the budget session, the Department of Revenue and Disaster Management, Scheduled Castes and Scheduled Tribes Development and Minority and Backward Class Welfare, Energy, Sports and Youth Welfare, Industry, Information Technology, Micro, Military and Medium Enterprises are scheduled to attend the question & answer session today.

Reportedly, on the first day of the Budget Session of the 16th Odisha Legislative Assembly, which began on Thursday, witnessed stormy scenes as Opposition Congress and BJP started shouting in the Well of the House.

Soon after Governor Prof Ganeshi Lal started reading his address, Congress members staged a protest over Kotia border dispute issue with Andhra Pradesh, mandi procurement issue, rising prices of petrol and diesel and law and order and walked out of the House.

BJP members also held a protest over the Kotia and mandi issues and staged a walkout.The Governor, however, moved condolence motion and addressed the House listing out achievements of the State Government.