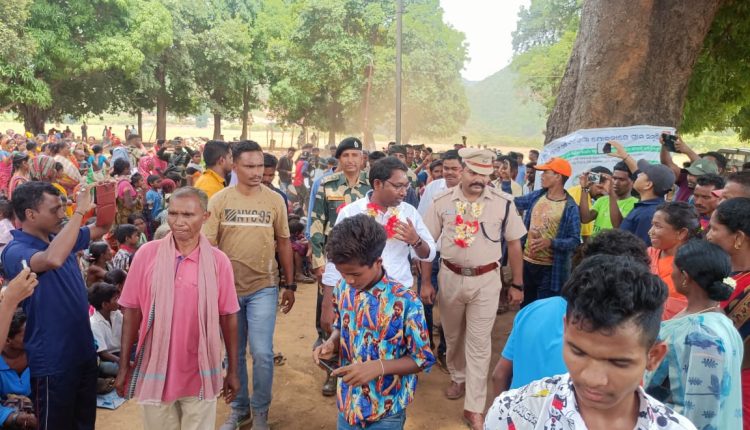 Malkangiri:  Shunning violence and with hopes of joining the mainstream, as many as 295 active Militias, Village Committee Members, Sympathisers and members of Gana Natya Sangha from villages Dhakadpadar, Dabuguda, Taber and Arlingpada of Jantri GP under Jodambo PS surrendered before police and district administration of Malkangiri at Jantri BSF COB on Saturday.

Malkangiri SP Nitish Vadhwani, BSF Commandant, Chitrakonda SDPO Anshuman Dwivedi and other officials were present at the special function held at the BSF camp at Jantri this morning.

The senior police officials said that the villagers who surrendered today were involved in several violent activities such as exchanges of fire, arson, civilian killings, hoisting of black flags instead of the national flag, burning of vehicles, boycotting MLA & MP elections, supply of food and logistics to Maoists, passing of information about the movement of security forces, threatening and assaulting of innocent tribals to leave their native villages, land, household articles and domestic animals.

On the plea of the police, the informer confessed that they were misled by the Maoists to be indulged in violence. Being encouraged by the surrender of local militias on 2/6/22 and seeing the development works by the government in the area, they decided to join the mainstream and lead a peaceful life, the police said.

They exhibited their opposition to the Maoist ideology by burning the dress materials of Maoists & gave slogans “Maobadi Murdabad”, the police added.

A grand feast was organised by the police and administration on the occasion. Besides, the surrendered villagers performed a local folk dance ‘Dhemsa’ at the camp. 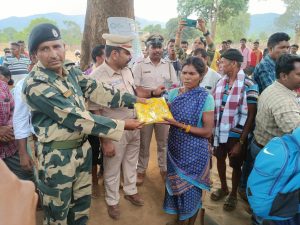 On 2nd June 2022, 50 active militias of Swabhiman Anchal, one of the country’s most Maoist-infested areas, had surrendered before Odisha DGP Sunil Bansal during his visit to Malkangiri to review anti-Naxal activities and security measures.