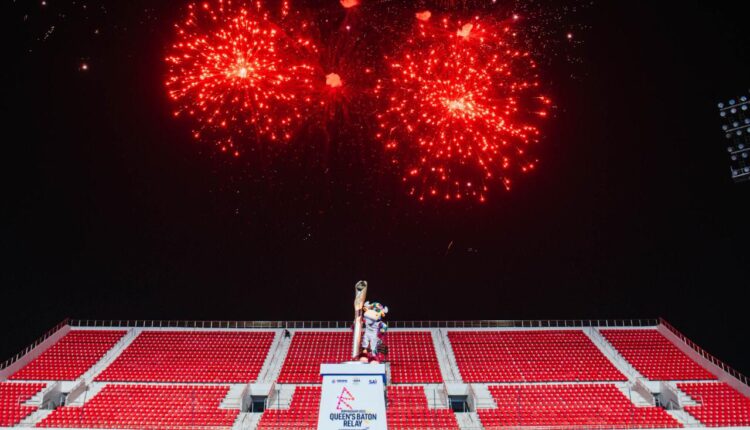 Bhubaneswar: As part of its epic journey, the 2022 Commonwealth Games Queen’s Baton commenced its journey in Odisha, from Kalinga Stadium with Olympians, Dutee Chand and Sunita Lakra carrying the baton and officially, kicking off the relay to historic landmarks -Puri Shri Jagannath Temple, Puri Blue Flag Beach and thereafter to Konark Sun Temple where it was received by officials of the State Sports Department and the District Administration. 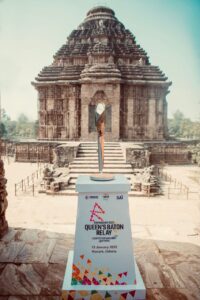 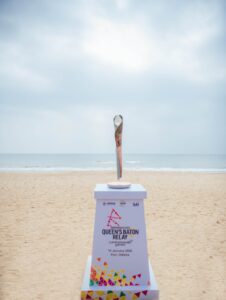 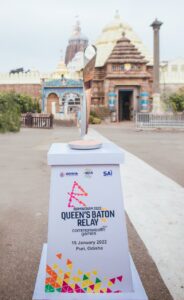 It later arrived at Raj Bhawan in Bhubaneswar where it was received by His Excellency, Governor of Odisha, Ganeshi Lal from Shradhanjali Samanatray, the ace footballer from the State. The Queen’s Baton then toured the temple city of Bhubaneswar before arriving at the Kalinga Stadium for the last-leg of the relay. 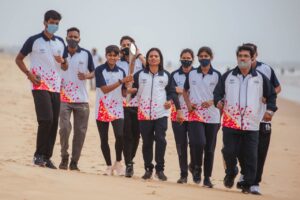 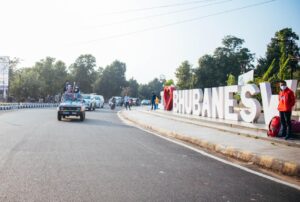 The Queen’s Baton Relay culminated with Dutee Chand handing over the baton to Commissioner-cum-Secretary, Sports and Youth Services, Govt of Odisha, R.Vineel Krishna, at the Kalinga Stadium, who received it with honours, in the presence of Bijay Nayak, Executive Chairperson, State Youth Welfare Board, before handing it over to Indian Olympic Association, amidst an audience of sportspersons and officials of the state ecosystem.

In a video message, Chief Minister of Odisha, Naveen Patnaik, shared, “It gives me immense pleasure to welcome the Queen’s Baton Relay to Odisha. The Queen’s Baton Relay is one of the best traditions of the Commonwealth Games and it is an honour for Odisha to be a part of its epic journey. Odisha has produced many eminent sportspersons and we are extremely delighted that today some of our finest sportspersons participated in the relay and became a part of the history of the Commonwealth Games.

In Odisha, we believe in the power of Sports and Youth. Today, our state has some of the finest sports infrastructure and an ever-evolving sports ecosystem that inspires athletes to follow their goals passionately. This relay will go on to encourage and inspire our young athletes to dream big and shine at the Commonwealth Games. I wish grand success of the  2022 Commonwealth Games, he added.

Thanking the Chief Minister, in a video message, British Deputy High Commissioner, Kolkata, Nick Low, said, “I was delighted when I heard that the 2022 Commonwealth Games Queen’s Baton Relay was coming to Odisha.  Having recently been to Bhubaneswar for the FIH Odisha Hockey Men’s Junior World Cup visited the magnificent Kalinga Sports Complex and met Odisha FC. Let no one be in any doubt that Odisha has international class facilities, highly talented athletes and administrators and, most important of all, a palpable passion for the sport.  I know Odisha will give the Queen’s Baton Relay the warmest of welcomes.  Birmingham looks forward to giving the athletes and officials from Odisha and from across India an equally warm reception.” 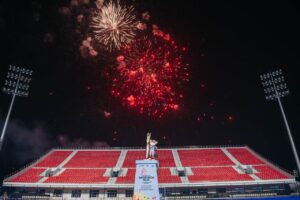 The Queen’s Baton that will depart Odisha for its next destination, Singapore, was given a spectacular and befitting send-off at the Kalinga Stadium amidst fireworks that lit up the night sky.

The Queen’s Baton Relay is a Commonwealth Games tradition that builds anticipation for the forthcoming Games by celebrating, connecting, and exciting communities across the Commonwealth and shining a light on untold stories and unsung local heroes from the places it visits.  Lining the length of its curved shape and woven throughout the Baton is a platinum strand, a tribute to Her Majesty Queen Elizabeth II, in her Platinum Jubilee which marks seventy years as Head of the Commonwealth.  This is the 16th official Queen’s Baton Relay, an epic journey across the Commonwealth visiting all 72 nations and territories, reaching Europe, Africa, Asia, Oceania, the Caribbean and the Americas.  The route spans 269 days, spending between two and four days in each nation or territory (including a precious night in Odisha!), covering 90,000 miles (1.4 lakh kilometres) with over 7,500 bearers carrying the Baton in their community.

Youth Stabbed To Death By Group Of People In Bhubaneswar