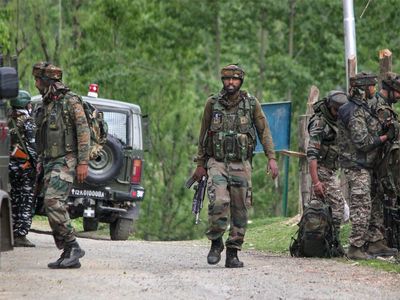 Srinagar: Two Lashkar-e-Taiba terrorists surrendered during encounter at Kulgam early on Tuesday. Police have recovered arms and ammunition including pistols.

They have laid down arms on appeal of families during an encounter between terrorists and security forces at Tongdounu in Kulgam district.

The Kashmir Zone Police recovered incriminating materials including two pistols and ammunition from them.

So far 12 terrorists have surrendered during live encounters with security forces this year, Vijay Kumar, IGP Kashmir said. Kashmir Zone Police said that the injured terrorist was shifted to a hospital and further probe is on.

Two Pakistan Army soldiers were killed along the Line of Control (LoC) opposite the Naushera sector in Rajouri district last Tuesday by the Indian Army while retaliating to ceasefire violation.