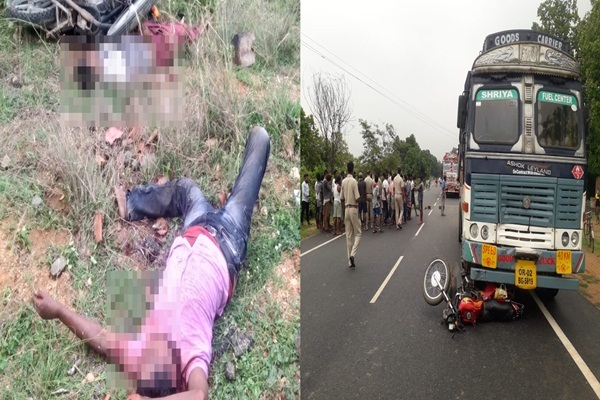 2 Killed, One Critical In Separate Road Mishaps In Jharsuguda

Jharsuguda: Two persons were killed while another reportedly sustained critical injuries in separate road mishaps in Jharsuguda on Monday.

According to sources, a biker was killed in a head-on collision between a motorcycle and a tanker coming from the opposite sides at Sanyashipali Square under Kolabira police limits on National Highway-49 this afternoon.

As per police information, the deceased has been identified as Dinabandhu Maji (50) of the same locality.

The victim was en route to a nearby village riding his bike when the mishap took place. Near Sanyashipali Square driver of a speeding tanker that was traveling in the opposite direction lost control over the wheels and drove extremely right to hit his bike from the front.

A critically injured Majhi was first rushed to a nearby hospital by some locals for treatment soon after the crash but doctors declared him brought dead.

Police reached the spot, seized the mangled bike to register a case, and sent Majhi’s body for post-mortem. Further investigation is underway by the police.

Meanwhile, irked over the incident, locals staged a protest and demanded compensation for the deceased’s family. Later, Kolabira Additional Tehsildar dispersed the villagers who had gathered there and assured to provide ex-gratia to the victim’s family.

In another mishap, one person was killed while another was critically injured after a bike they were riding on fell off a road under Tumbadihi police limits in Jharsuguda district on Monday morning.

According to sources, the duo was heading to Jharsuguda from the Bagdihi area when they lost control over the two-wheeler and meet the accident. Bagh died on the spot.

Police rushed to the spot and sent Suna to a nearby hospital for treatment through an ambulance.

What Are Some of the Major Online Casino Trends?